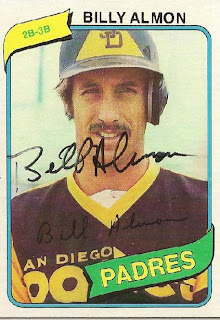 Billy Almon was drafted twice by the Padres first in the 11th round of the 1971 and then again as the first pick in the 1974 draft. He made his major league debut in 1974 and played in every season from then until 1988. He came in 19th in the voting for American League MVP in 1981. He for 6 years for the Padres before being traded to the Expos. He also played for the Mets, White Sox, A's, Pirates and Phillies through the rest of his career. Most of his moves were the result of free agency, he was only traded three times in his many moves. I remember Bill Almon on one of the first cards I remember when I got back in collecting in 1985, it was a first round draft pick card in the 85 Topps set. I believe that I got this card from ABC unlimited.
Posted by Rod (Padrographs) at 6:10 PM