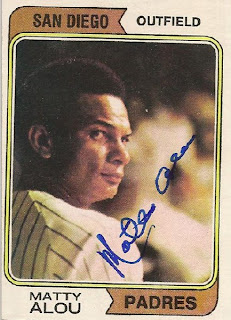 Matty Alou played in 15 seasons but his biggest note is that he played in the outfield once for the Giants with his brothers Jesus and Felipe. I got his brother Felipes autograph through a player in the Expos system. I wrote Kent Bottenfield to get his autograph for my autographed Oregonian collection when he was at West Palm Beach in the minors. He signed and told me he would get anyones autograph for me. Felipe had been one of my baseball heroes growing up, so I sent Kent a card and he got a 73 Topps card of Felipe with the Hankies signed for me.

But this post is supposed to be about Matty. He was signed as an amateur free agent by the Giants before the 1957 season, he played 6 seasons with the Giants, then 5 years with the Pirates, in 1972 he split the season between the Cardinals and A's, then he split 1973 between the Hankies and Cards, finishing his career in 1974 with 48 games played for the Padres. He played in two World Series 10 years apart, in 1962 with the Giants and '72 with the A's. He played in the 1968 and 1969 All Star games. In 1966 he won the National League batting title beating out his brother Felipe. He played three seasons in Japan after being released by the Padres. In 2007 he was inducted into Hispanic Heritage Museum Hall of Fame. He is also known as the uncle of Moises Alou and Mel Rojas and the cousin of Jose Sosa.
Posted by Rod (Padrographs) at 8:28 PM