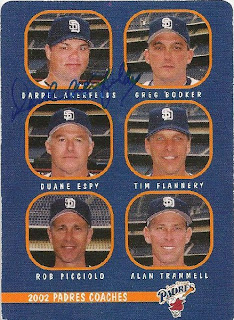 Darrel Akerfelds played for the A's, Indians, Rangers and Phillies and was in the minor leagues of the Mariners and signed as a free agent by the Braves at the end of his career. So why is he here? Because he is on a card pictured in a Padres uniform, only two of the coaches pictured on this 2002 Keeblers card ever actually played for the Padres, Greg Booker and Tim Flannery. The Mothers' cookies sets and the Keebler sets were great for getting coaches to sign, there are several more Keebler, Mothers and team cards of coaches throughout the 701 signed cards. Darrel was drafted by the Braves in the 1980 amateur draft but did not sign, he was drafted again in 1983 by the Mariners as the 7th pick in the first round. After the 1983 season he was traded to the A's, then in the middle of the 1987 season he was traded to the Indians with Brian Dorsett for Tony Bernazzard. The Rangers arranged his services in the Rule 5 draft in 1988. The Phillies purchased his contract in March of 1990 from the Rangers, in October of 1991 he was granted free agency. The Orioles signed him as a free agent in January of 1992, but he never played in the majors for them having pitched his last major league game in July of 1991. Darrel has been the bullpen coach for the Padres since 2001. I sent this to Darrel in care of the Padres and received it back within 2 weeks. I have Padrographs of the rest of the coaches on this card except for Trammell, I have tried several times through the mail with no success.
Posted by Rod (Padrographs) at 4:16 PM