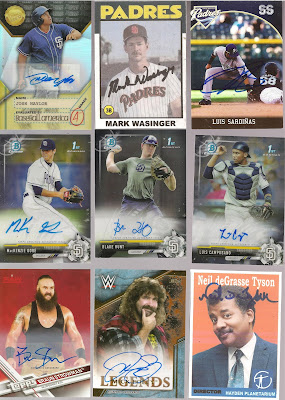 I added a few new Padrographs. I have decided to add some of my favorite WWE Superstars to my collection.  I added a signature of one of the foremost, or at least well known of the scientists in the United States. And I started a new collection, an idea I stole from Gavin over at Baseball Card Breakdown.
Josh Naylor, Padrograph #1071, Josh was the 12th overall pick in the 2015 draft by the Marlins.  In 2016 he was traded to the Padres as part of a six player trade. I got this 2017 Bowmans Best Card from Ebay.
Mark Wasinger, Padrograph # 1072, Mark was drafted by the Padres in the 3rd round in 1982.  He was traded to the Giants in 1987 after playing 3 games for the Padres in 1986. 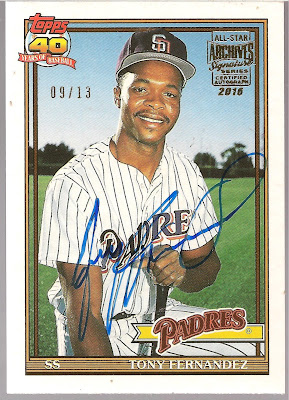 Luis Sardinas, Padrograph #1073, Luis played in 63 games for the Padres in 2016 & 2017 before being selected off waivers by the Orioles in May of 2017.
MacKenzie Gore, Padrograph #1070, MacKenzie was the 3rd overall pick in the 2017 for the Padres.
Blake Hunt, Parograph #1069, Blake was drafted by the Padres this year.
Luis Campusano, Padrograph #1068, was drafted in the second round in 2017.
I have decided to collect autographs of some of my favorite WWE Superstars.  I already have a Daniel Bryan autograph and I have added Mick Foley and Braun Strowman.
Neil DeGrasse Tyson is married to my officemates college roommate.  I sent this to him at the Hayden Planetarium, it took about six months to come back.
Gavin has his 12/25 collection for his birthday.  My birthday is September 13 and it is difficult to find cards that are 9/13 but I finally found one.  Cool that it was a Padre to start the collection.
Posted by Rod (Padrographs) at 1:24 PM No comments: