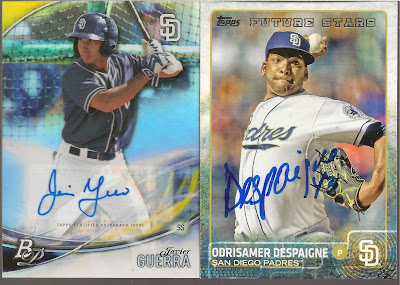 Javier Guerra, #991, Javier came into the Padres system this year.  He spent the previous three years in the Red Sox system.
Odrisamer Despaigne, update, I update from a Panini logoless card. Odrisamer was traded to the Orioles before this season.
Fernando Rodney, #992. Fernando was traded to the Marlins partway through the 2016 season. 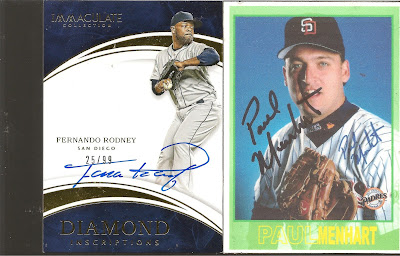 Paul Menhart, #993.  Paul pitched in 9 games for the Padres in 1997. He spent a season with the Blue Jays and Mariners before coming to San Diego.

I was hoping to get to 1000 cards this season, I still have time until the end of the World Series.  There are still several cards out in the mail that I sent out throughout the season.

Posted by Rod (Padrographs) at 9:11 PM No comments: