Eight autographs in one pack 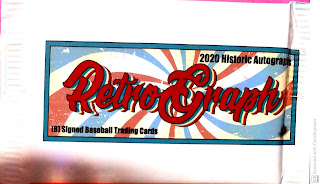 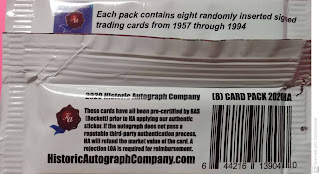 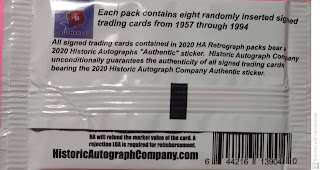 Saturday I and one of my granddaughters went to visit her cousins in Vancouver, WA.  After visiting with them for while I went to a super sports card store on Andresen, the Diamond King knows of what I speak.  I was desperate for packs because they are hard to find in Portland.  I picked up some Donruss, some Series Two, and a couple of things.  I spotted this pack and inquired about it. For $34 you get eight autographed cards. Each card has an authentication sticker on it.  The pack says they were pre certified by Beckett.  I picked up one pack and below are the eight cards I got. 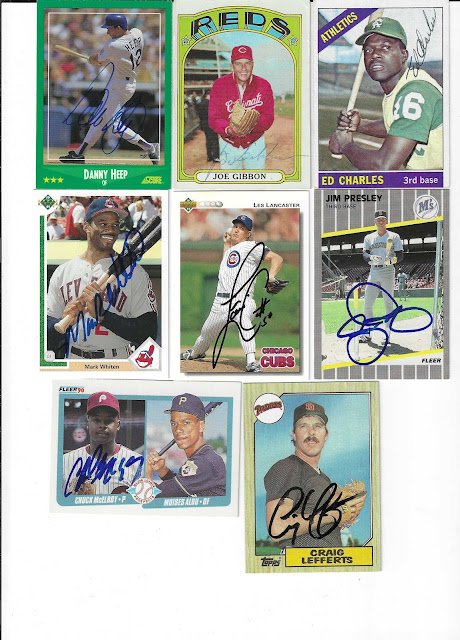 I went sorting through my stuff today and sorting it. I found a bunch of stuff I thought you all might want. First come, first served.  Please limit yourself to four items apiece.  Thank you. 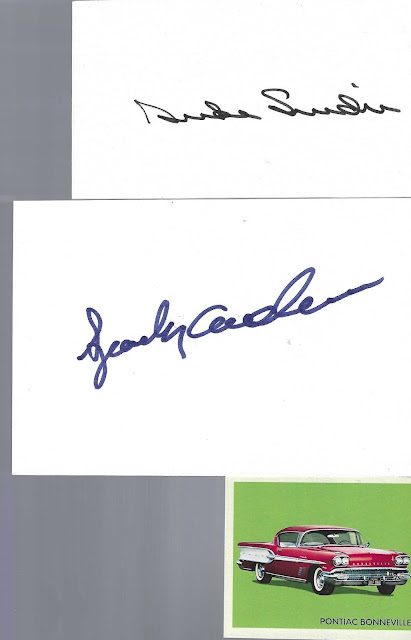 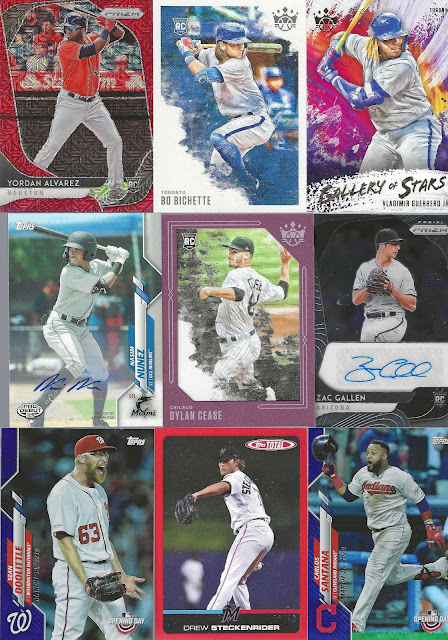 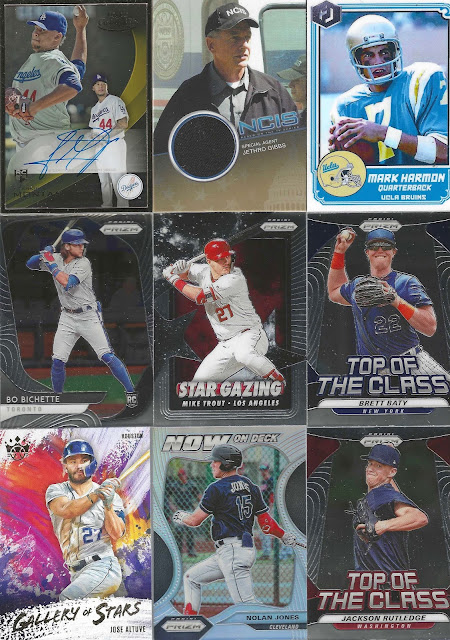 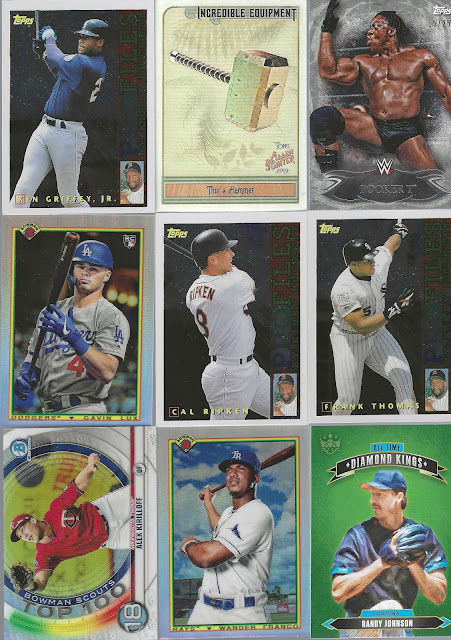 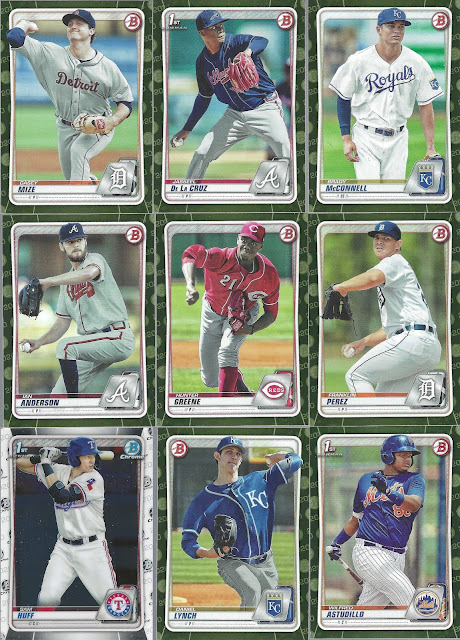 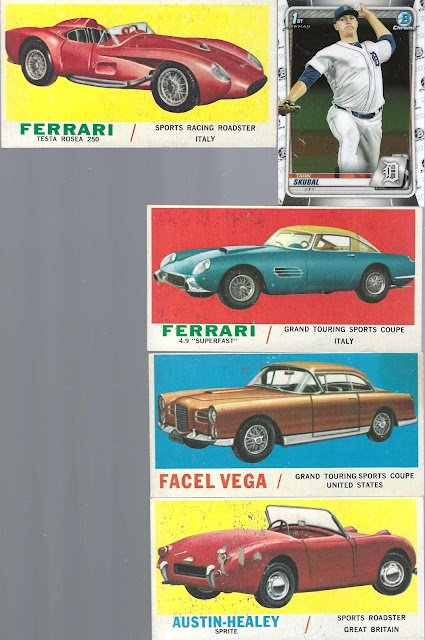 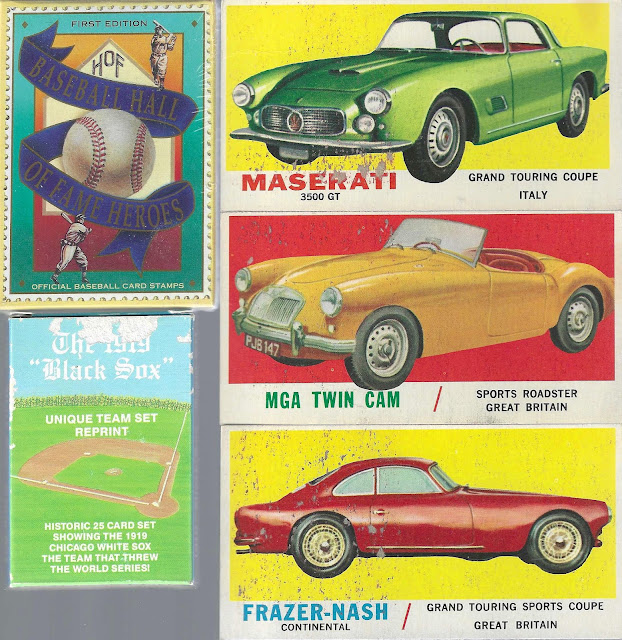 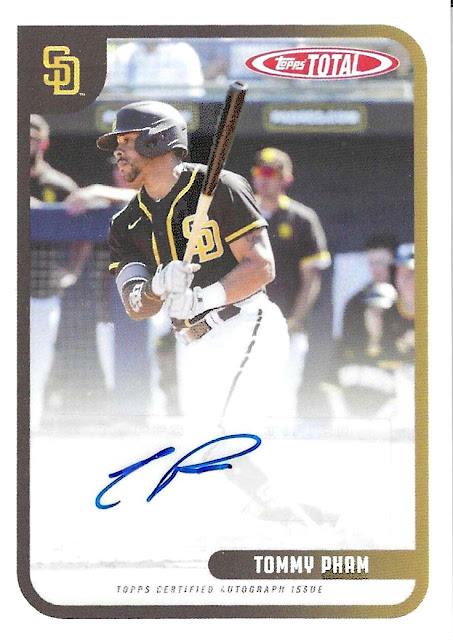 I haven't sent any through the mail request out this year.  I did send some customs to a gentleman who was attending spring training but everything closed down before he could get anything signed.  I found this Topps Total card of Tommy Pham on eBay.  Who knows when Padrograph #1205 will show up.
Thanks to Fuji, I got Bipped today.  A bunch of non Padres cards featuring Bip Roberts.
Posted by Rod (Padrographs) at 4:08 PM 1 comment:

Three of a Kind

I am starting a new collection, which I am calling Three of a Kind.  Each of the collections will have three cards that have something in common.
I wanted to start with these three cards.  I have never gotten political in my posts, but I may start here.
All three of the above protest racial bigotry and police brutality and their careers suffered for it.
Tommy Smith protesteded with John Carlos at the 1968 Olympics by raising a gloved fist and bowing his head during the national anthem.
Colin Kapernick kneeled during the national anthem in 2016.  He began by sitting through the anthem, but after talking with a military veteran he decided to take a knee.  He hasn't played since 2017.
Bruce Maxwell was the only major league baseball player to take a knee.  He was playing for the A's and took a knee, with his hand on his heart.  Teammate Mark Canha had his hand on Maxwell's shoulder in support.
Today is Juneteenth, a day that should be given over to some soul searching about how we make things better for everyone and make sure that are people are treated equally well.
Posted by Rod (Padrographs) at 6:57 AM 3 comments: 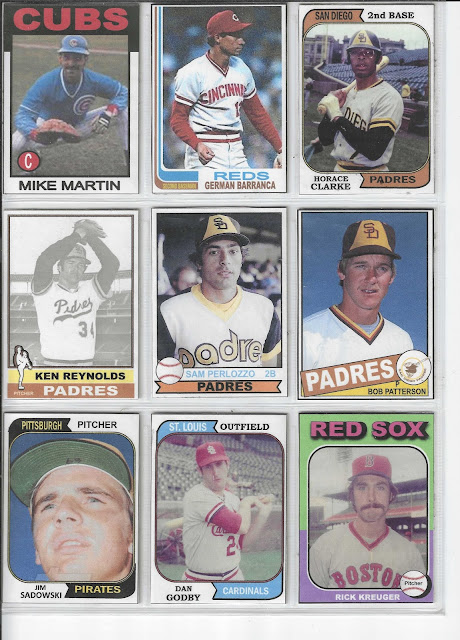 I have seen the Mike Martin photo on other cards.  The German Barranca and Horace Clarke cards are upgrades to previous cards.  Who knew Sam Perlozzo played for the Padres?  How is your recognition today?
Posted by Rod (Padrographs) at 12:11 PM 3 comments:

I see one name that I think some people will recognize.  How did you do today? 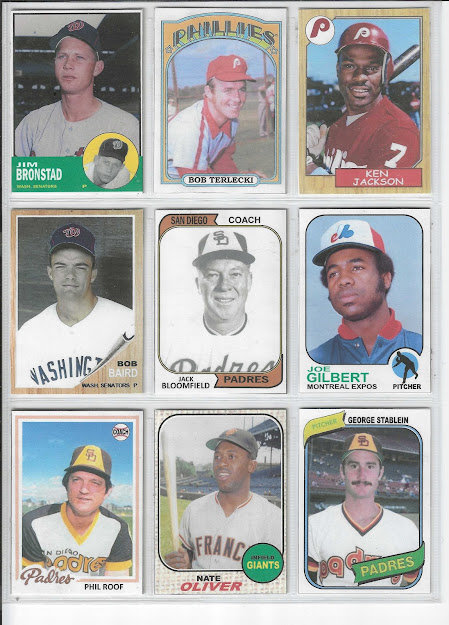 Jeff Doyle went to college at Oregon State University which is the only reason I remember him.  I couldn't tell you anything about the rest of them.  This is just series one, I am now 363 cards into series two.  If you see a card you are interested in let me know and I can print it for you.  How is your recognition score? 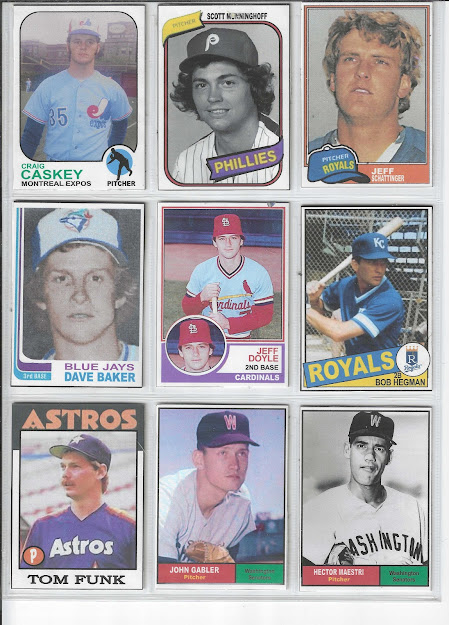 not the padres part 2 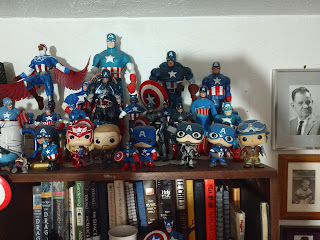 Awhile back I posted about something else I collected besides Padrographs. Today I wanted to post about another collection of mine.  I collect various action figures of Captain America. The left side of my collection had a cataclysmic implosion when someone decided to add one of my sons bowling trophies to the the shelf.  I am waiting to redo the display until I can tier the pieces.  I have to pick up some lumber to do that.  Captain America has long been one of my favorite comic book characters and Chris Evans did him right in the MCU. 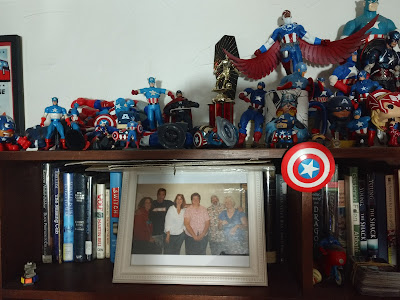 We almost reached the end of the Lowell Palmer collection.  I think there is one more.  This picture of him with the Cardinals is one he sent me to use.  It is interesting when you see who has coached for your team.  Did you know Duke Snider and Sparky Anderson were Padres coaches.  How is your name recognition today? 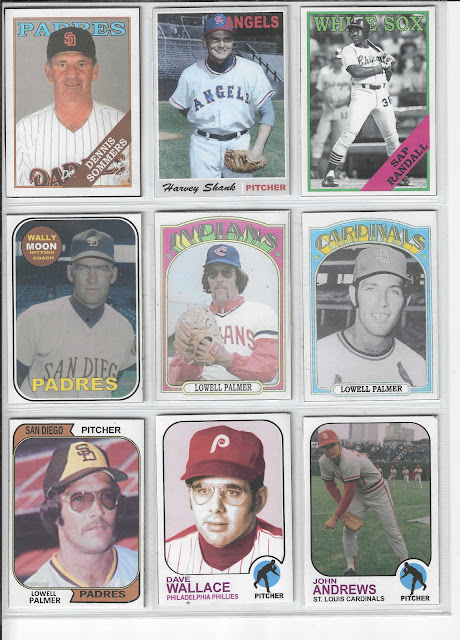 Two blogs from Portland, Oregon that have the only player on this page of customs that you have probably heard of, how strange is that.  The Martinez card was a rush job which is why I didn't get the autograph off the photo before I made the card.  Other than Mr. Martinez what is your recognition score today? 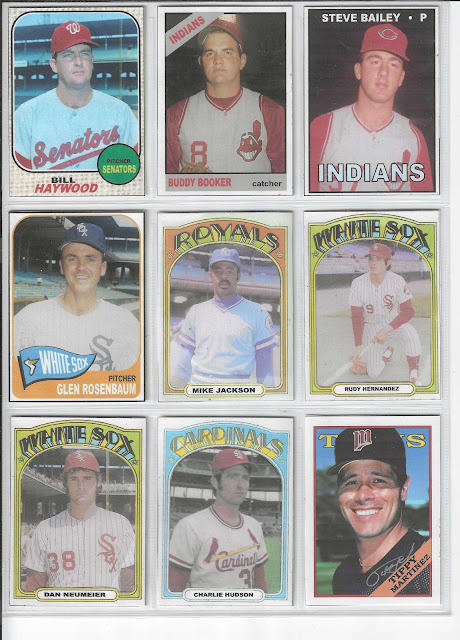 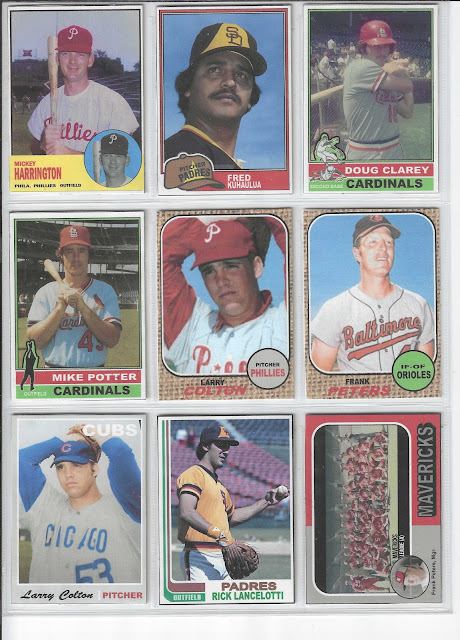 This page has people I know and have met. As we are closing the bookstore we have a poster that is from the very first day of the first Wordstock book festival.  Larry is the founder of the event and I asked him if he wanted it. The poster is signed by all of the authors present that day.  Ursula K. LeGuinn was the most well known author on it.  Larry came by the bookstore on his way to Seattle.  Frank Peters used to have a restaurant downtown near the courthouse.  A lawyer took I and friend there after we were witnesses for his client.  I see Frank at many Portland Mavericks events.  If you have watched the Battered Bastards of Baseball on Netflix you have seen him. I have tried to get Rick Lancelotti to sign his custom through the mail multiple times.   How is your recognition score today?
Check out the contest over at Chavez Ravining.  A cool post and some cool stories in the comments.
Posted by Rod (Padrographs) at 8:45 AM 4 comments:

Let's see how of many of you start another 0fer streak today.  I don't remember anything special about any of these guys, even the Padres.  How is your recognition score today? 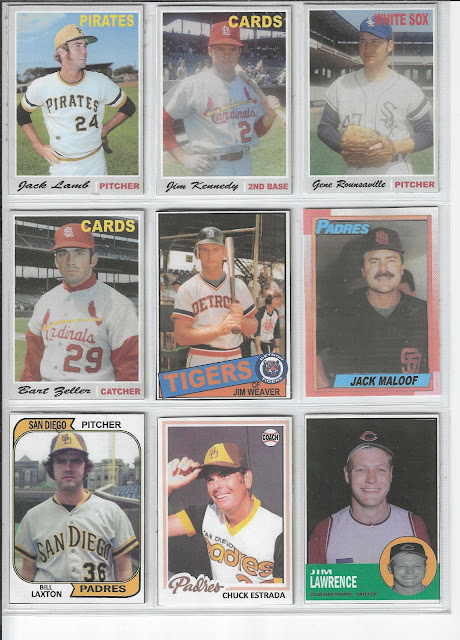 Okay today everyone should recognize a couple of the guys on this page.  The Lowell Palmer card started a string of his cards with different teams.  He even dug a picture out of his own collection for one of the teams.  I hope everyone recognized at least one player today.  Jim McAndrew's son Jamie helped with the card of his Dad with the Padres.  How did you do on recognizing someone?  Hope you broke your 0fer streak. 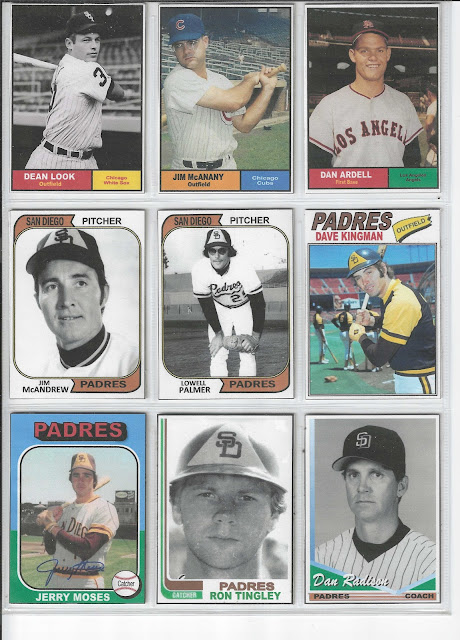 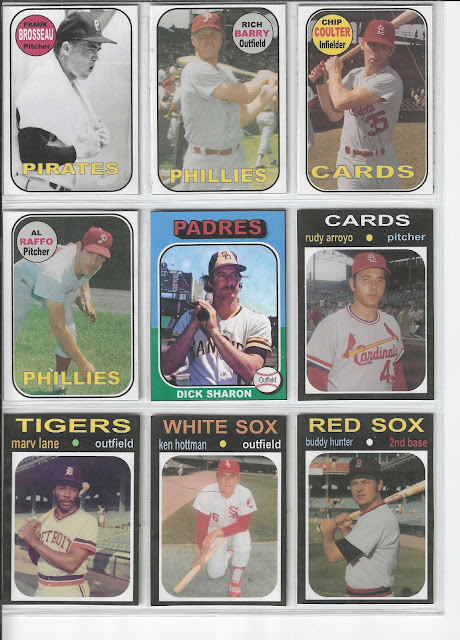 Another page of a bunch a guys I don't remember much about.  I even went and read the backs and still don't remember them.  Most of them had very short major league careers. Here is how many games each played in the majors, in order; 3/20/6/45/242/9/90/6/22. I just made a card for a pitcher who pitched in one game for the 1981 Expos.  How did you do recognizing these guys?
Posted by Rod (Padrographs) at 6:09 AM 4 comments: 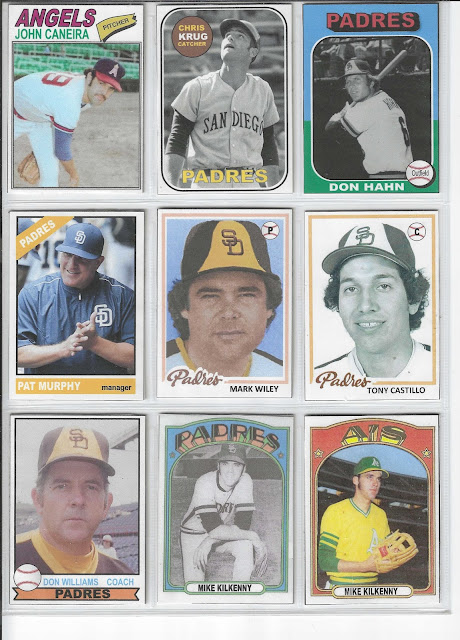 A very Padres-centric page.  I made the Pat Murphy after he was named manager.  I started making the cards of current Padres in the current Heritage style because it was easier to make than the computer generated graphics of the current cards.  If I was able to find good pictures of the coaches I made cards of them. I have gotten all of these particular Padres cards signed.  Recognize any of these guys?
Posted by Rod (Padrographs) at 6:33 AM 3 comments: 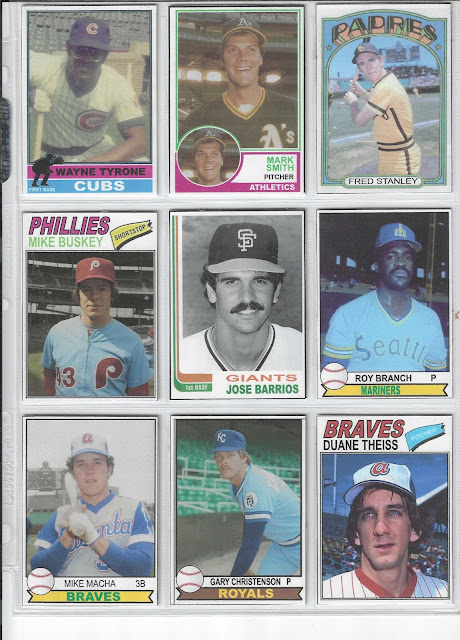 Wow, once again I have forgotten all about these guys.  Maybe next time through I will scan the backs.  Anyone recognize any of these guys?
Posted by Rod (Padrographs) at 9:56 AM 5 comments:

Customs Page 13, but first this message 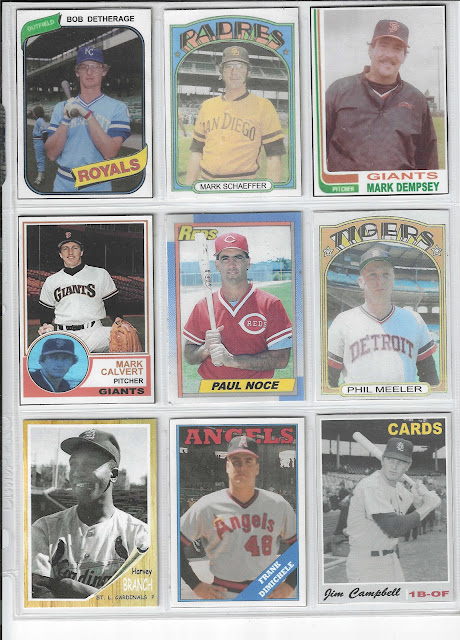 First a question, then a promo and then the cards.  Does anyone have a spare pack, hanger box or blaster of 2020 Bowman they would be willing to sell me?  I have checked all over the east side of Portland and haven't been able to find any. Thank you for listening to me whine.
Nachos Grande is having a really cool contest.  Kind of a June Madness contest having to do with Allen & Ginter insert sets.  Great prizes to be had and it looks like fun.  Working for the library I hope the required reading insert set wins.
I had only heard of one of the players above and that was Mark Schaeffer.  How many have you heard of?
Posted by Rod (Padrographs) at 3:29 PM 4 comments:

Customs Page 11, a missed page and a bookstore update. 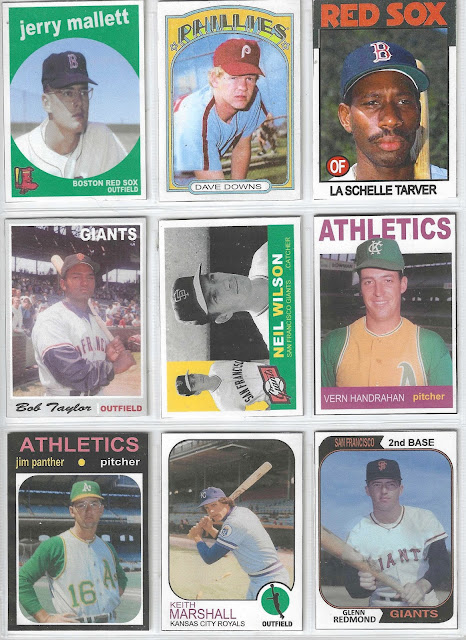 After yesterdays post a few people asked why the bookstore was closing.  The branch library that is moving into the building was even smaller than ours.  In the new age of social distancing it was too small to allow staff and library patrons to both be in the building, plus our building was the original home of that branch from 1912-1960.  I think the library realizes that the bookstore was a valuable community resource and will someday and somehow reopen it in some form.
Somehow I managed to skip a page.  Jerry Mallett was drafted by the Syracuse Nationals of the NBA in 1957.  He opted for baseball and had a four game career with the Red Sox in 1959.  How is your name recognition for this page?
Posted by Rod (Padrographs) at 7:01 AM 3 comments: 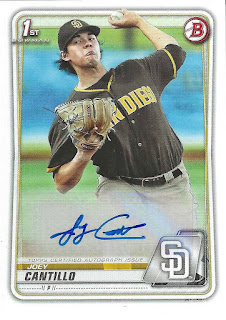 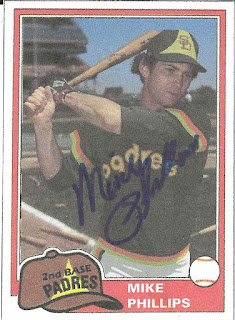 It has been a productive few but sad few days for me.  On Friday morning I got the word that the bookstore I have managed for the last nineteen years would be closing.  Monday I spent calling my sixty five volunteers and letting them know there was not going to be a return to work for them once the library reopens.  Then today I had to work remotely from home because of the fear of rioting near the building where I am currently working. 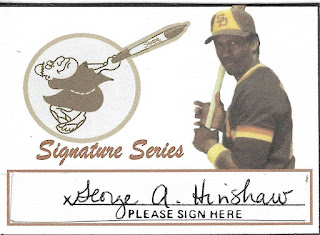 I did get a lot done in our yard this weekend.  I move six wheelbarrows of dirt twice a week from the front yard to the back.  We are deconstructing a berm in the front yard and building up a garden in the back yard.
But over the past week I have  picked up three new Padrographs. #1201 Joey Cantillo, drafted by the Padres in the 16th round in 2017.  Has played up to Fort Wayne. The card is from 2020 Bowman and I picked it up on eBay.
#1202 Mike Phillips, came from St. Louis in a trade that saw him, Terry Kennedy, John Littlefield, Al Olmsted, Kim Seaman, Steve Swisher and John Urrea for Rollie Fingers, Gene Tenace, Bob Shirley and Bob Geren.  Mike played in fourteen games for the Padres in 1981 before being bought by the Expos in May.  Kudos to Punk Rock Paint for the uni transformation and help from Gavin at Baseball Card Breakdown. I got the signature through PastPros.
#1203, George Hinshaw, was drafted by the Padres in the eleventh round of the 1980 draft.  He played in thirteen games for the Padres in 1982 and 1983.  Someone had the signature on an index card on Ebay so I bought that and designed the card around it.  I had attempted to send him a custom 1982 card a couple of times but it never came back.
I would like to thank Kerry at Cards on Cards for sending me some Padres, a black Alan & Ginter Gwynn and some top of the class Wil Meyers.  I got consolation prizes from Johnny's Trading Spot for the BFG.  In the sadness over Friday morning news I forgot to play.