Padrograph #1224 and a narrow victory

In my mail yesterday I received a custom card back from a signing.  It was Antonio Osuna, who pitched in thirty-one games for the Padres in 2004. 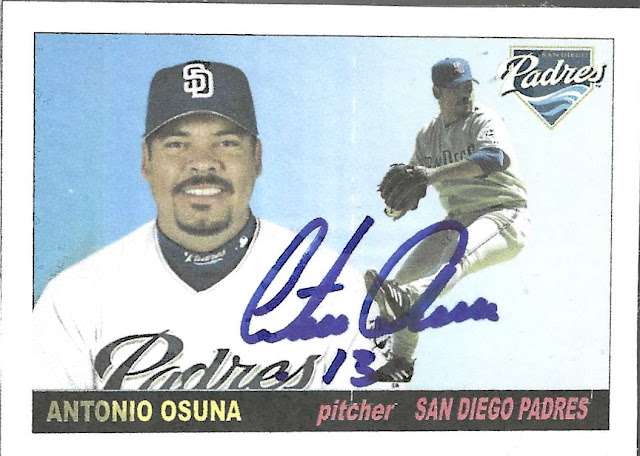 El Nino squeaked out a narrow victory over Terry Shumpert.  I think mostly it was a reaction against the overdone Turkey Red inserts than a referendum on the players.  Ian Kinsler managed to squeak out one vote, Terry Shumpert had five votes and Fernando Tatis, Jr won with just seven votes.

Up next is spot number seventy-seven.  The card of Archi is a mystery to me.  Why is there an Astro right behind him with a glove on also.  Archi never was an All Star so I don't know what the context could be.  I hardly remember Dustin Moseley with the Padres but he pitched in twenty games in 2011 and one in 2012. 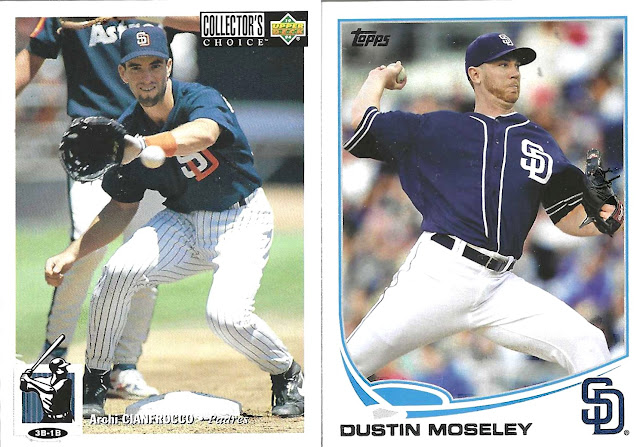 Archi all the way! Better looking card, floating ball and the whole Astros thing make it a clear winner for me.

I would’ve never noticed the Astro with the glove on the Cianfrocco card! Voting for Archi

Good eyes. If you didn't point that out, I wouldn't have noticed. It's a conversation starter card, so Archi gets my vote.

Collector's Choice + Mystery player in the background = Vote for Archi

Archi gets my vote. Cool Osuna auto. I enjoyed watching him pitch as a dodger.

Wouldn't be surprised to see Archi make in unanimous.

I'm guessing the explanation for the Astro there is nothing more than that it was warmup before a spring training game, and both teams were warming up at the same time because the schedule was off in some way. I'd love to think there was something more interesting, but probably not. Anyway, the other card isn't that great, so add me to the Archi chorus.

I ain't breaking the streak...Archi for me too.

Nice TTM as well. I always wonder if the player sees the custom and knows it wasn't a real release or not. I'd like to think if I was a player, I'd try to have a card of me from every release out there.

Is the Archi an "oddball"? I have never seen a card like thst either. My vote goes to that card.

Archi for me as well.

Archi for the win!

Mystery card all the way!

A part of me wanted to find a reason to give poor Moseley a sympathy vote, but it really has nothing outstanding going for it. Archi it is then!

Normally I'd vote Topps over any UD card but that Topps Mosely card is so nondescript. So Archi gets my vote.

Please visit
(http://dradodalovetemple.com)
(https://youtu.be/B279mkEo_C4)
i am here to give testimony on how this powerful spell caster called Dr Adoda helped me to fix my relationship. i was heartbroken when my fiancee told me he is no longer interested in marrying me because he was having an affair with the other woman where he work. I cried and sobbed every day, until it got so bad that I reached out to the Internet for help, that was when i read a review about the great work of Dr Adoda, then i contacted him for help to get my lover back, he helped me cast a powerful (reconciliation love spell) and to my greatest surprise after 48 hours of doing the love spell my Fiancee came back on his knees begging me to forgive him We are now happily married and all thanks goes to Dr Adoda Wonders for helping me save my relationship you can contact Dr Adoda through his email address: adodalovespelltemple440@gmail.com or WHATSAPP him on+2348112825421