Sisterhood of the traveling jersey

Over at gaslamp ball, there has a group of fans that have been taking an old Padres jersey around the world and chronicling its journey.  I asked to take part and the jersey came my way for a short stay. 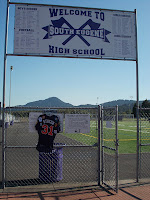 Friday, August 17, my wife called me to tell me that the jersey had arrived at our house. I finished the rest of the day at the bookstore and drove home to see the jersey. When I pulled it out of the envelope I was amazed at the things that had been added to it, a Oaxaca ribbon, a patch from Belgium, a Bring Back the Brown patch (where can I get one of those?), Randy Jones and Mickey Mouse autographs, and various other things. As I packed to drive from Portland to Eugene, to visit our son, his girlfriend and our granddaughter I began to think about where I would take the jersey, besides a baseball game.
We got to Eugene and spent some time visiting and shopping, always gotta go to Goodwill and St. Vinnys, and having lunch at a great deli called Jiffy Mart, my son, our exchange student and I headed out to take pictures. Eugene is the Padres short season A team so this is where many of the players drafted by the Padres start their professional careers. This is also the town where I began being a Padres fan.
Our first stop was my high school, it was the longest I ever went to one school. We spent three years in Eugene while my Dad went to college after retiring from the Navy. I managed to make it to 10 schools in 12 years in 4 states on two coasts. This is where I became a Padres fan, my first day of school I learned that one of my classmates was the younger sister of Padres #1 pick David W. Roberts. That was the day I began following the Padres and have ever since. 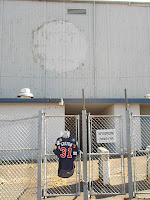 Then we crossed the street to Civic Stadium, where the Eugene Emeralds used to play. It was built in 1938 and the Ems played there from 1969 to 2009. The Ems have been the farm team for several major league teams including the Phillies from 1969-1974, as their AAA team. We got to see Mike Schmidt, Greg Luzinski, Larry Bowa and Bob Boone all play. In 2001 the Padres moved their A, short season team to Eugene. I remember going to an Ems game game when the Spokane Indians came to town, Flan was the Indians manager. He asked me to get him some matches, I did and he lit a smoke bomb and dropped it in his own dugout and then yelled at his players for not taking things seriously. They won. You can see where they Ems logo used to be on the stadium wall. Saw Joe Randa play here and got Sandy Alomars' auto here. 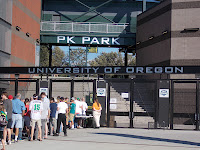 Then we headed to PK Field at the University of Oregon, PK field is named after the former Athletic Director Pat Kilkenny, although many people think it refers to Phil Knight, co-founder of Nike and Oregon Alumni. The Ems have played at PK since 2009. We got there early because we wanted to get our Prefontaine Bobbleheads. 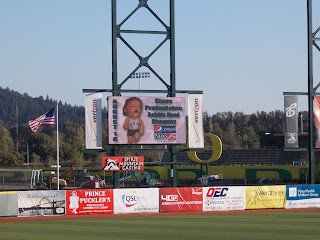 One of the reasons to go to the game besides seeing Padres farmhands playing was because it was Steve Prefontaine bobblehead night and they were only giving away 1,000.  Pre was an idol of mine when I was in high school and I watched him run many times between 1972 and 1975, when he died at the age of 24 in a car accident.  I also got to be in a movie about him that was filmed in Eugene called Without Limits. 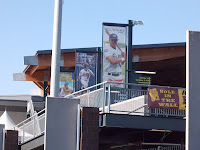 Strewn throughout PK Field were banners of Padres past, present and future.  I think that is Sean Burroughs in front. 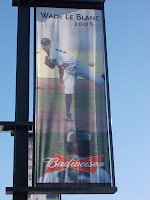 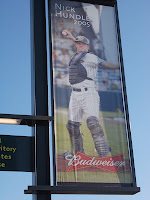 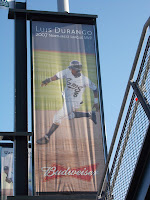 Luis Durango who is currently in the Astros system, after playing for the Padres in 2009 and 2010. 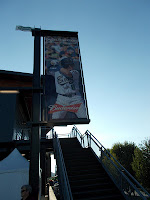 Daniel Robertson, drafted by the Padres in 2008 and currently playing in Tucson for the Padres AAA club. 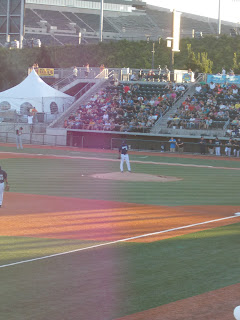 Joe Ross, the Padres first round pick in 2011 was the starting pitcher.  He was on the team on a rehab assignment. 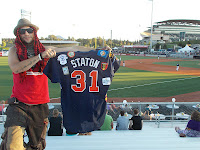 My oldest son, Daniel, accompanied me to the game and held the jersey up so we could get a picture of the jersey at the game. 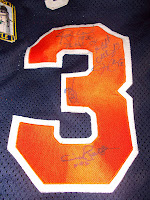 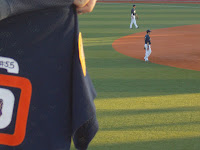 It was a fun and profitable trip, got to spend time with family, hold my granddaughter, spend some time at the ballpark and I put my bobblehead on ebay and sold it for $225 dollars. 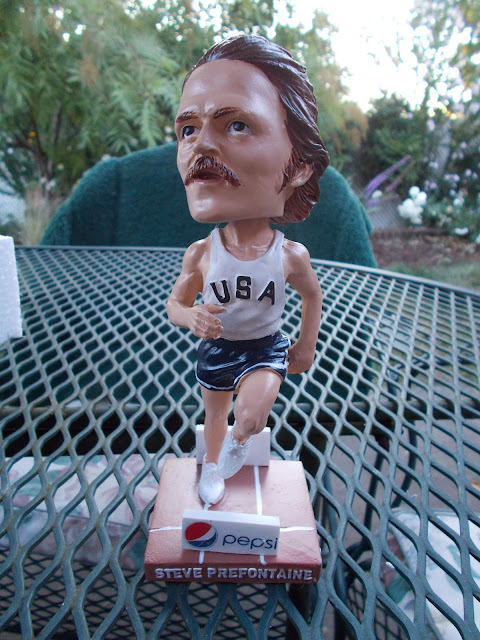