Bill Werle (Whirl) played for the PCL Padres from 1957 to 1960 when the Padres were affiliated with the Cleveland and White Sox organizations.

Will Middlebrooks played in 83 games for the Padres last year and is with the Brewers this year.

Posted by Rod (Padrographs) at 6:34 PM No comments:

your source for Andy Green and Tarrik Brock autographed cards

Rocky Gale, Rocky made his major league debut last year with the Padres. He was resigned by the Padres as a minor league free agent and invited to camp as a non roster free agent this year.  I made this card and used the 1988 template because that was the year he was born.  The card came back in about two weeks.

Andy Green is the Padres manager this year.  I used the 1967 template because I knew that would be this years Heritage.  I asked him to sign one card and keep the rest.  He signed and returned them all.  I have given all the extras away.

Tarrik Brock is the first base coach for the Padres this year.  Same story as with Andy Green, sign one and keep the rest.     But he signed them all. 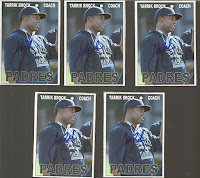 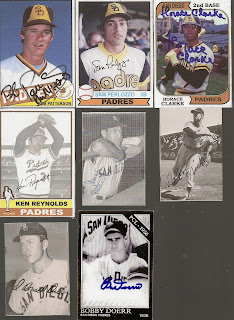 Bob Patterson, pitched in three games in September of 1985.  One of my customs, that I got signed through a dealer.

Sam Perlozzo, played in two games in September of 1979, playing in his final major league game on my 22nd birthday. Another of my customs signed through the dealer.

Horace Clarke, played in 42 games for the Padres in 1974.  He and Lowell Palmer were purchased from the Yankees in May of 1974.  I don't know why Horace signed the card twice.  Another of my customs, an upgrade from a previous custom.

Ken Reynolds, pitched in 19 games for the Padres in 1976.  This is an upgrade of a previous custom I had done. I think I will keep the previous custom in  the collection.

I have decided to add signatures from 1936-1968 Padres to my collection if I happen across them,  maybe I can find a Pete Rose card with the Padres.

George "Catfish" Metkovich, appeared in 24 games for the Padres in 1957.  This card and the other two PCL Padres were purchased from a dealer on ebay.

Matt Kemp is currently playing for the Padres.  The 2015 & 16 took about a week and a half to come back from Peoria.

Melvin Upton, Jr. is also currently playing for the Padres, both of his cards also took about a week and a half to come back. 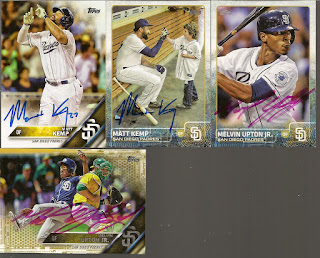