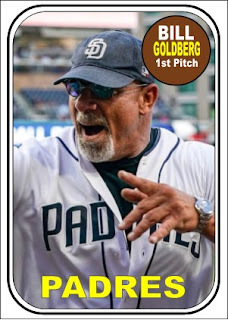 WWE Superstar Bill Goldberg threw out the first pitch for a Padres game.  I wish I could figure out how to get him to sign this.  I just made it today.
Posted by Rod (Padrographs) at 8:28 PM 1 comment: 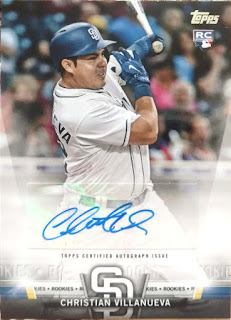 Christian Villanueva, was signed by the Rangers as an amateur free agent in 2008.  He was traded to the Cubs in 2012 with Kyle Hendricks for Ryan Dempster.  In December of 2016 the Cubs granted him free agency and he signed a free agent contract with the Padres.  He played in 12 games for the Padres in 2017 and has played in 64 games this year and has hit 16 Home Runs.
Posted by Rod (Padrographs) at 6:18 PM No comments:

Trevor Cahill, spent part of the 2017 season pitching for the Padres before being traded to the Royals in July 2017. Padrograph #1096

Posted by Rod (Padrographs) at 6:15 PM No comments: 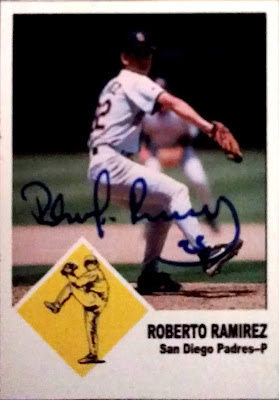 Roberto Ramirez, had a two year major league career.  Playing for the Padres in 1998 and the Rockies in 1999.
He pitched in 21 games for the Padres.  I made this card and got it signed through PastPros.
Posted by Rod (Padrographs) at 9:00 PM 1 comment:

Padrograph #1094 and now I have vintage 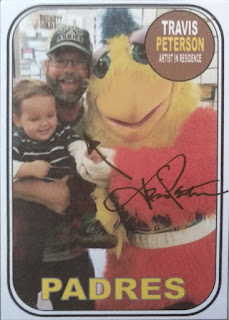 Since this is my collection I get to decide what fits in it.  In the Padres 2018 their is a article about an artist whose work often features Padres themes in his artwork.  Most of us know him as Travis Peterson or the mind behind PunkRockPaint.  I decided to make a card of him.  He became a Padres fan through a meeting with the San Diego Chicken so when I found this picture of Travis with the Chicken and Travis' son, I used that picture to make a card of him.  I sent him the card and found that Travis signs through the mail.  He son liked the card so much that he sent me a piece of his artwork of a penguin as a thank you. This morning at 7 AM I was at Portland International Airport to pick up my sister-in-law as she flew in from Seward, Alaska. She came bearing fresh Alaska salmon and fresh Topps vintage cards.  The cards had belonged to her husbands brother growing up in New Jersey.  The cards are a mixture ranging from 1965 to 1981.  There are just a few cards prior to 1973, there is a small group of '72 but they had all been stapled to something and one actually still had the staple in it. There are many of many of the other years including a large number of '74 Topps Traded cards.  The biggest group is 1981 Topps.  There were even some 78-79 hockey cards, those hold no interest for me, so I will be trading or selling them.