I have accumulated a fair number of cards of many teams and have made over six hundred custom cards.  I am downsizing my collection and will be offering team lots of all teams except the Padres. There are custom cards, inserts and even a few autographs.  Not every team has autographs. The custom cards are of players that never had a card or a card with the team on the card. I have priced each lot at 25¢ a card.  Below is a list of the teams and the number of cards and the total price for each team. I will update the post as people sign up and pay for their cards.  Shipping will depend on the number of cards you get.

Padrographs 1262-1264 and my current state of mind about the hobby. 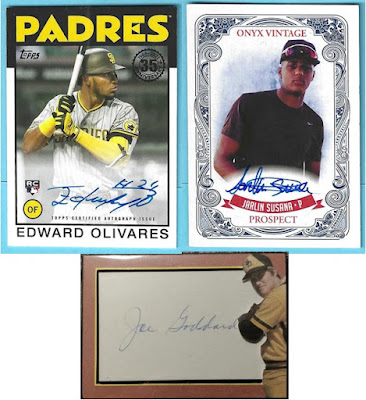 Hey, long time no see.  I got frustrated with what Padrographs were selling for and cards in general.
First lets talk about these three cards then we will move onto other things.
Edward Olivares, is Padrograph #1262.  He played in 13 games for the Padres in 2020 before being traded to the Royals for Trevor Rosenthal.  He has played in 15 games for the Royals so far this year.
Jarlin Susana, is Padrograph #1263.  The 18 year old was signed by the Padres as a free agent.  He is currently playing in the DSL.
Joe Goddard,  is Padrograph #1264.  He was signed by the Padres in 1971 and played in 12 games for the Padres in 1972.  He played in the Padres system through 1976.  I have made custom cards of him and sent them to him and never heard from him.  I found  this Beckett autograph cut on eBay and then an overlay for it.  I designed it and my wife cut it out for me.  She has a much steadier hand than I.  I got this card back in January.
With all the prices going up I have made a few decisions about my collection.  Also I am not getting any younger, I will be signing up for Medicare in September.  I have decided that I am just going to concentrate on my Padrographs and Tim Flannery cards.  I am going to curtail my Padrographs and only get cards of players who have actually played for the Padres not just in their system and all the managers.  There goes my Joe Pepitone autograph.  I will be selling many things that don't meet that criteria.
I will be hosting a group break soon that will consists of commons, inserts, autographs and custom cards.  I am sorting all my non Padres by teams and when I get them all sorted I will be posting the details of the break.  The price will be determined by the number of cards for the team.  I am looking at making each card between 25-50.
Right now I am looking for Tim Flannery cards that are not from Topps.  I think I have all of them.
Once I get down with the group break I will be figuring out what to do with all my non-auto Padres cards.
Thank you for stopping by and good night.
Posted by Rod (Padrographs) at 8:45 PM 7 comments:

Bowman Chrome came out and had five Padrographs in it.  I managed to snag three of them for under $10 apiece, but the other two are ridiculously priced, Victor Acosta and Reginald Preciado.  Acosta is an 18 year who has only played in the DSL and Preciado is now in the Cubs system as part of the Darvish trade.  I also picked up some custom autos through an acquaintance in San Diego. 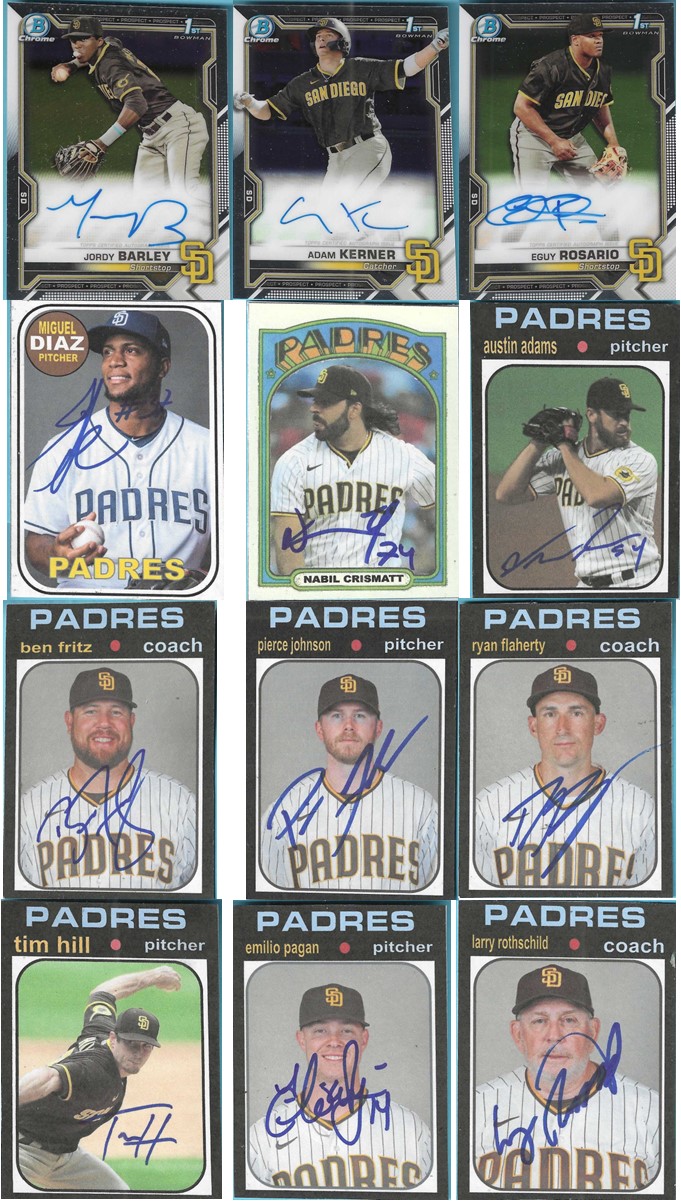 I made the cards and Josh Harrison in San Diego got them signed for me.  This is actually the second Jordy Barley autograph I have.  I made a set of the 2019 Tri Cities Dust Devils, the Padres short season rookie team and had the players sign them and Jordy was among them. He is actually in the Washington Nationals minor league system, he was sent to them in the trade for Daniel Hudson.  Adam Kerner was an undrafted free agent signed by the Padres in 2020 who played in Ft Wayne in 2021.  Eguy was signed by the Padres in 2016 and played at AA San Antonio last year.  All the rest of the cards are customs and played for the Padres last year.
I am going to be cutting back on my Padrographs this year.  I am only going to try for players who have been on the active roster and coaches.
I have sorted all my extra Padres by player.  If you have a particular card you are looking for of someone who has played for the Padres let me know and I will see if I have it.
Posted by Rod (Padrographs) at 3:35 PM 6 comments: