Great Night at the Ballpark, The visitors won 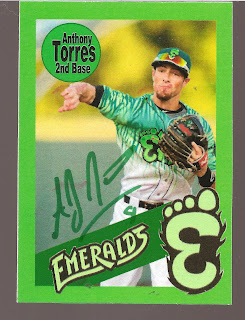 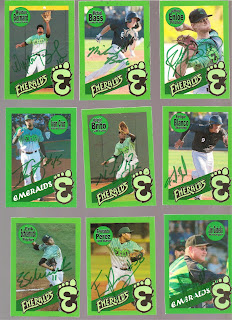 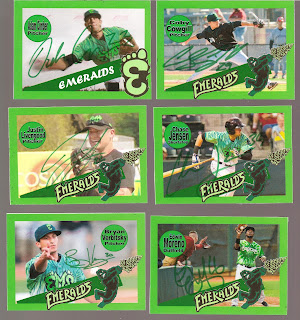 I went to my second Hillsboro Hops game of the season last night, the first one was the third home game and last night was the last night was the last home game.  I only went because the Hops (D'backs affiliate) were playing Eugene (Padres Affiliate).  I managed to set in the front row right next to the Ems dugout before the game.  The first autograph I got was Jim Gabella, the manager.  He said he hadn't seen that card before and I told him I made it and he signed for me and I gave him a copy.  I made two copies of each card one to get signed and one to give to the player.  Next out was Coby Cowgill, the starting pitcher, who liked it also.  The rest of the team starting coming over and I got all but three of the cards I had signed.  The three guys I didn't were all gone for different reasons, Trae Santos' brother had been suffering from cancer and passed away, Ryan Miller was injured and Ronnie Richardson had been promoted.  I disappointed several of the players because I hadn't been able to find photos of everyone.  I got the photos from a local Eugene TV stations website.  The EMS post lots of player photos on their Facebook page but they don't identify the players.  It was fun seeing everyone reacting to the cards and sharing them with one another.  I got to talk with Trevor, one of the Ems interns, and he was the one who told me where the three guys were and where the last one to get signed was.  Bryan Verbitsky was the last one to get signed and he was in the stands behind home plate charting pitches.  Trevor took the card to him and told him to let me know that Bryan would sign the card. I had to go through a suite to get to him.  I had to sweet talk my way through the suite, by getting the security guy to let me through.  He did and watched me and then when I showed him the card he wanted to see them all.  Prior to the game guys were coming over and asking if I cards of them and when I showed Jeff Enloe his card, he told me that wasn't him and didn't want to sign it.  A few minutes he came back over and said what the heck and signed it took the extra copy.
After the game I got to talking to some other people who were wearing Emeralds gear, turned out one of them was the graphic designer for the team.  He told me that he didn't design their cards this season, the Assistant general manager did and she got behind.  He also told me that my cards were better than the team issued cards.
I had a great time talking with the players and getting stuff signed, I am already working on my design for next year and am trying to figure out how to get pictures of more of the players earlier in the season. It was a good game and 2009 draft pick Donovan Tate had a good games and the Ems won 4-3.
Posted by Rod (Padrographs) at 1:46 PM 5 comments:

The start of the Road to Petco 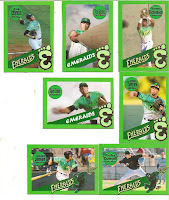 The Eugene Emeralds are the Padres Rookie League Short Season team.  I am going to go see them play the Hillsboro Hops this Friday and want to get some signatures so I made these to get signed.  I bought my front row seat next to the visiting dugout today, so I hope to get as many of these signed as possible.
Posted by Rod (Padrographs) at 9:31 PM 4 comments: