This time the visitors lost but I got some signatures 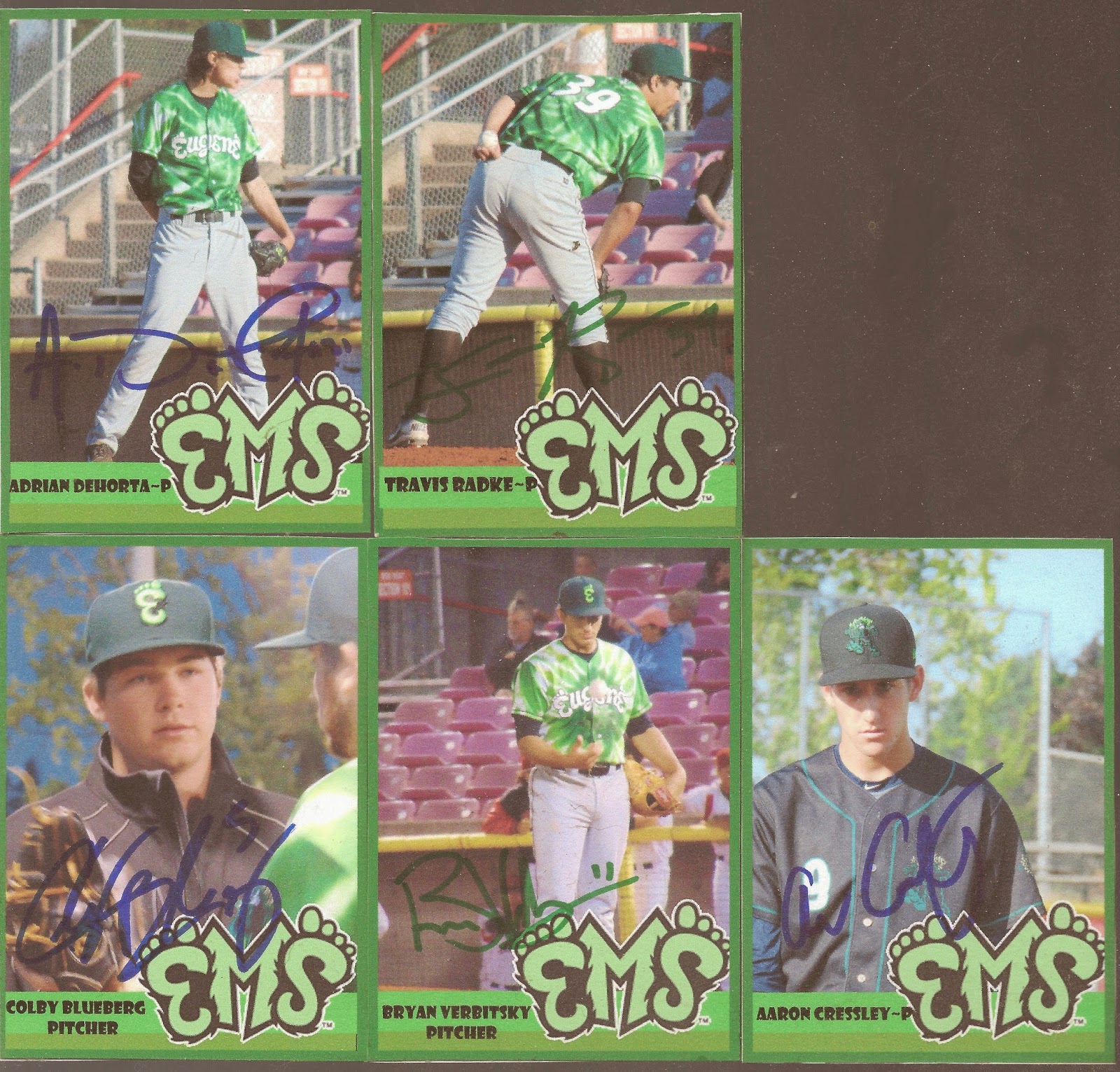 Last night my friend Robert Jones picked me up after work and we drove down to Salem-Keizer  to see the Volcanoes play the Emeralds. I like going there because I pay for General Admission and sit in my lawn chair and talk to the guys in the bullpen.  I finally decided on a design for this years cards and this is it.  I made backs for them and started numbering them at 141, card 1, 2014.  The guys were happy as I gave them each one of their cards when they signed one for me. I am going to see the Ems play Hillsboro on August 9, so I need to get some more made before them.  I took a lot of pictures again last night but I might have to resort to getting pictures off the web.  So far I have made ten cards. 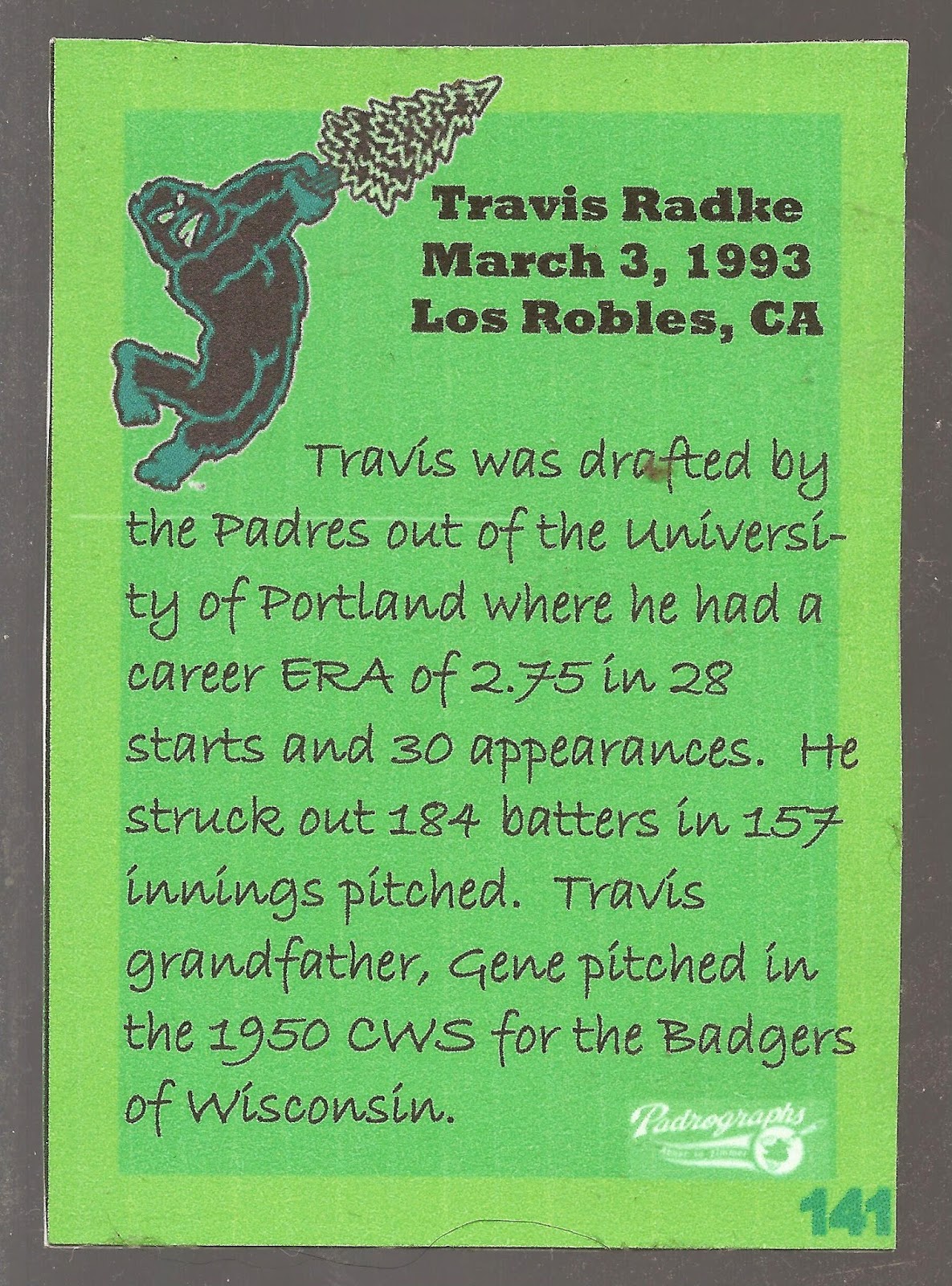 Posted by Rod (Padrographs) at 7:41 PM No comments:

Once again the visiting team wins and I get some sigs. 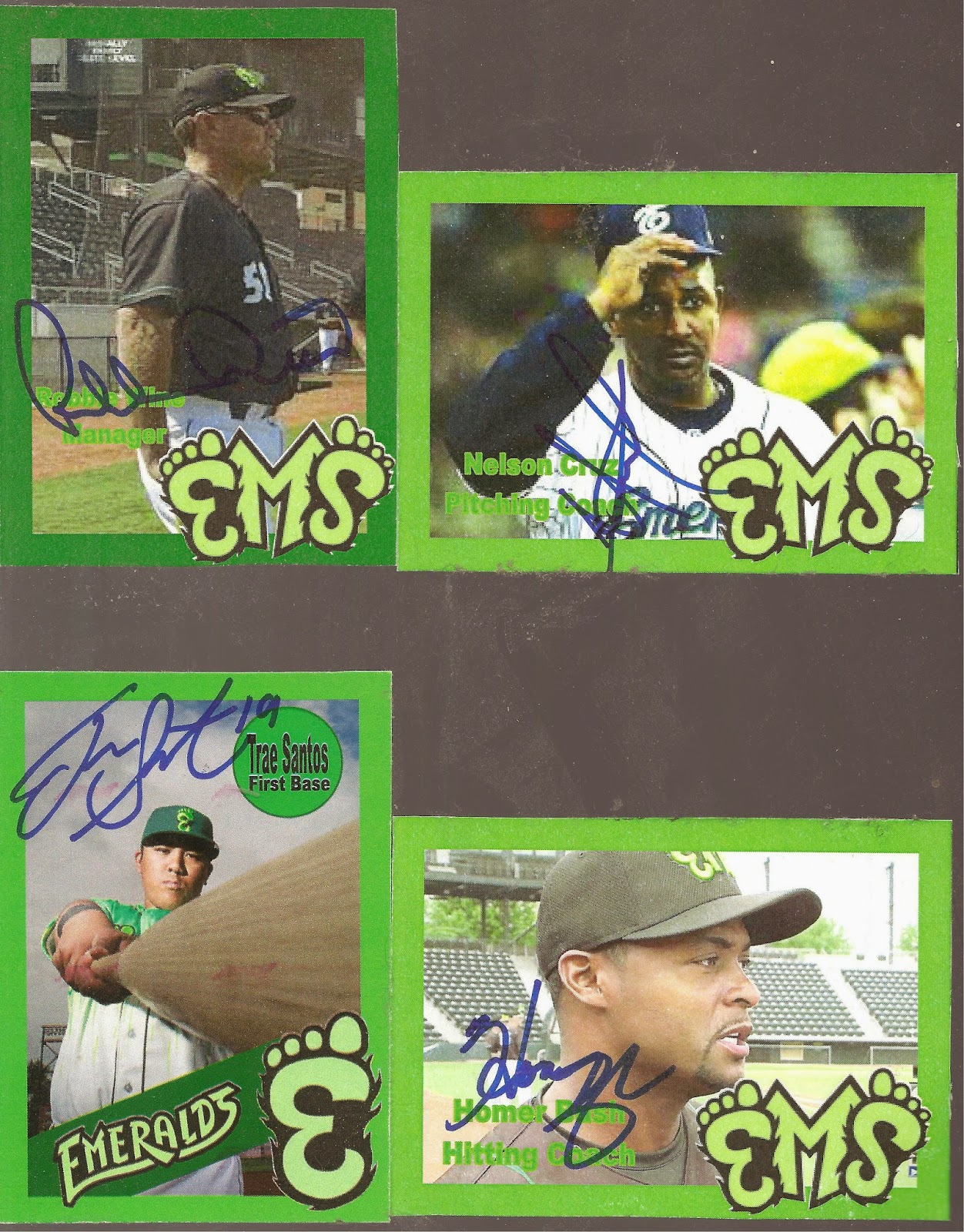 I went to see the Salem-Keizer Volcanoes (Giants) play the Eugene Ems (Padres) on Tuesday and Wednesday night.  We didn't stay for much of Tuesdays game, I think we left in the 2nd inning.  The two year old granddaughter was running my wife into the ground.  I took some cards I had made to get signed and took a lot of pictures.   The cards at the left I got signed Tuesday before the game.  The Trae Santos was a card I had made for him last year, but he had to go home for a funeral before he could sign it.  Homer Bush, Robbie Wine and Nelson Cruz were all pictures I got off the internet.  Trea Turner, Jose Urena and Marcus Davis were all pictures that The Prowling Cat took when he went to a game in Eugene on July 3. 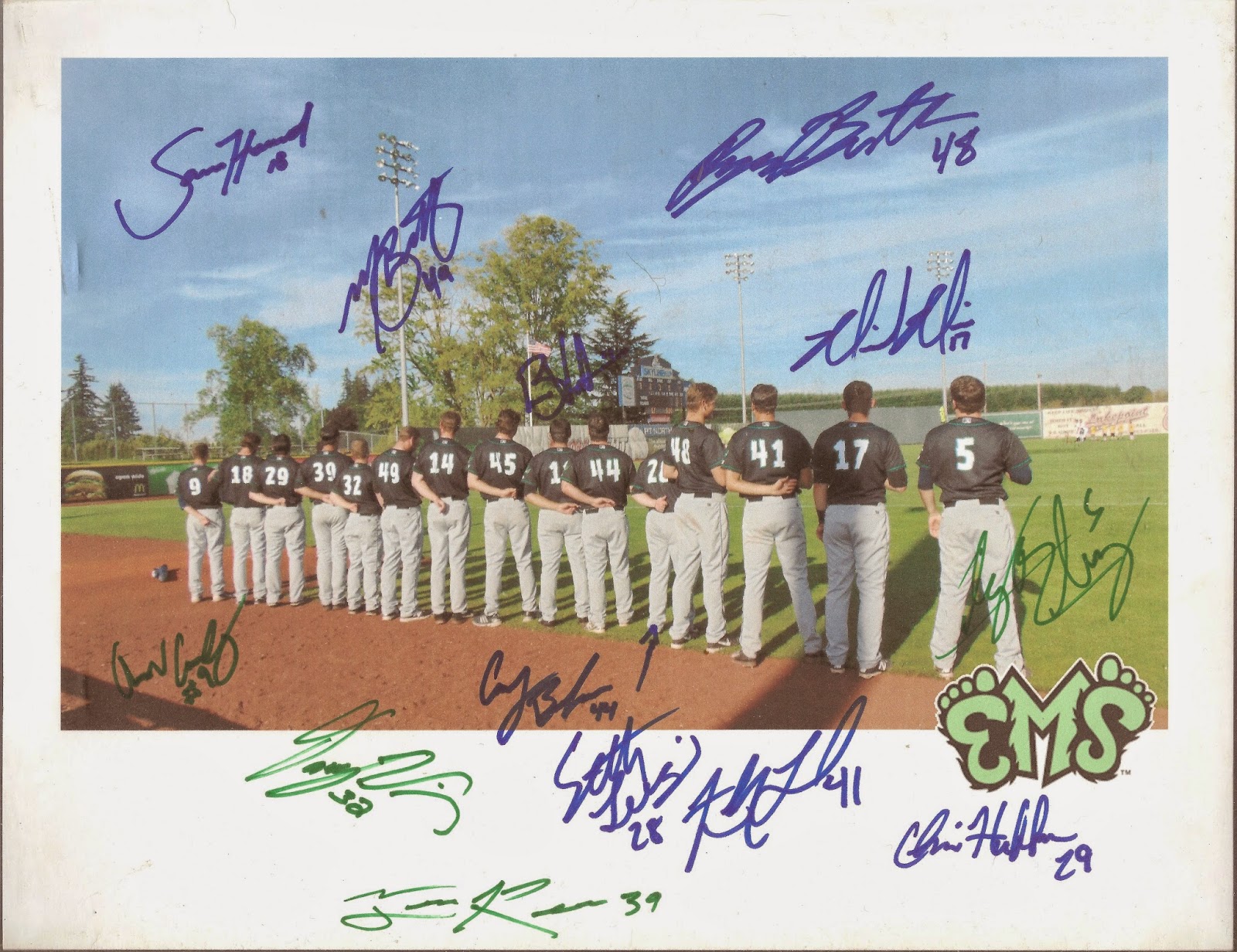 I took a picture of all the Ems pitcher just as they lined up for the National Anthem on Tuesday.  I printed it out and took to the game with me Wednesday night.  I got to stay for the whole game because I went by myself.  One of the nice things, to me anyway, is I just take a folding chair and set right next to the bullpen and talk with the pitchers.  I managed to get 12 of the fifteen guys in the picture to sign it.  I still have a few more games to get the other 3. 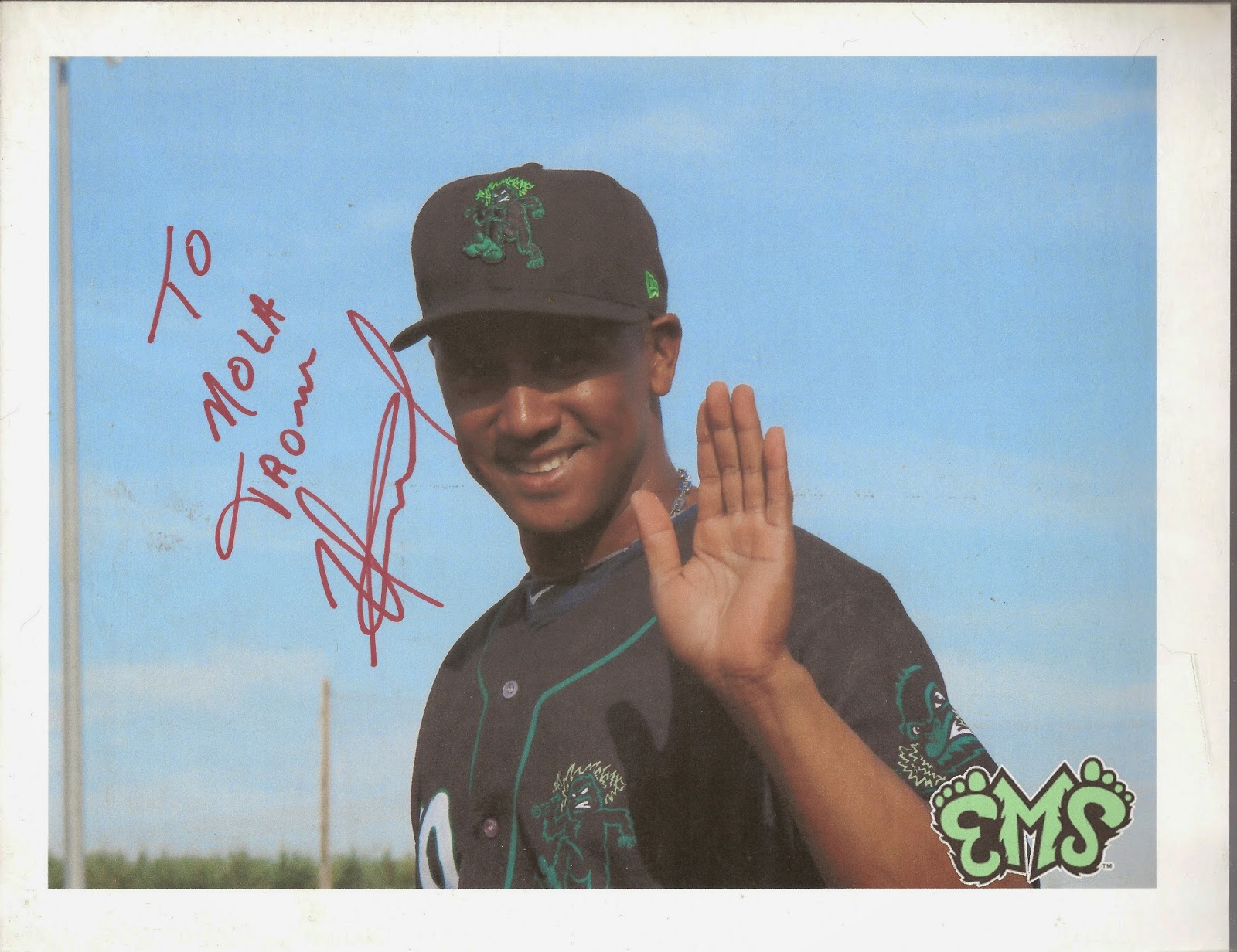 On Tuesday we took our 2 1/2 grand daughter to the game with us.  She and my wife were taking pictures while I got autographs.  Nelson Cruz, the pitching coach, came out and waved to Nola and my wife took a picture.  Nola kept talking about the baseball guy. It was her first ever game, so I got Nelson to sign the photo for her and someday I will give it to her.

I took a whole bunch of pictures so I can make cards of as many guys as possible.
Posted by Rod (Padrographs) at 7:44 PM 3 comments:

The Letter R, Sheet 2 and I am going on vacation so posting will be sporadic 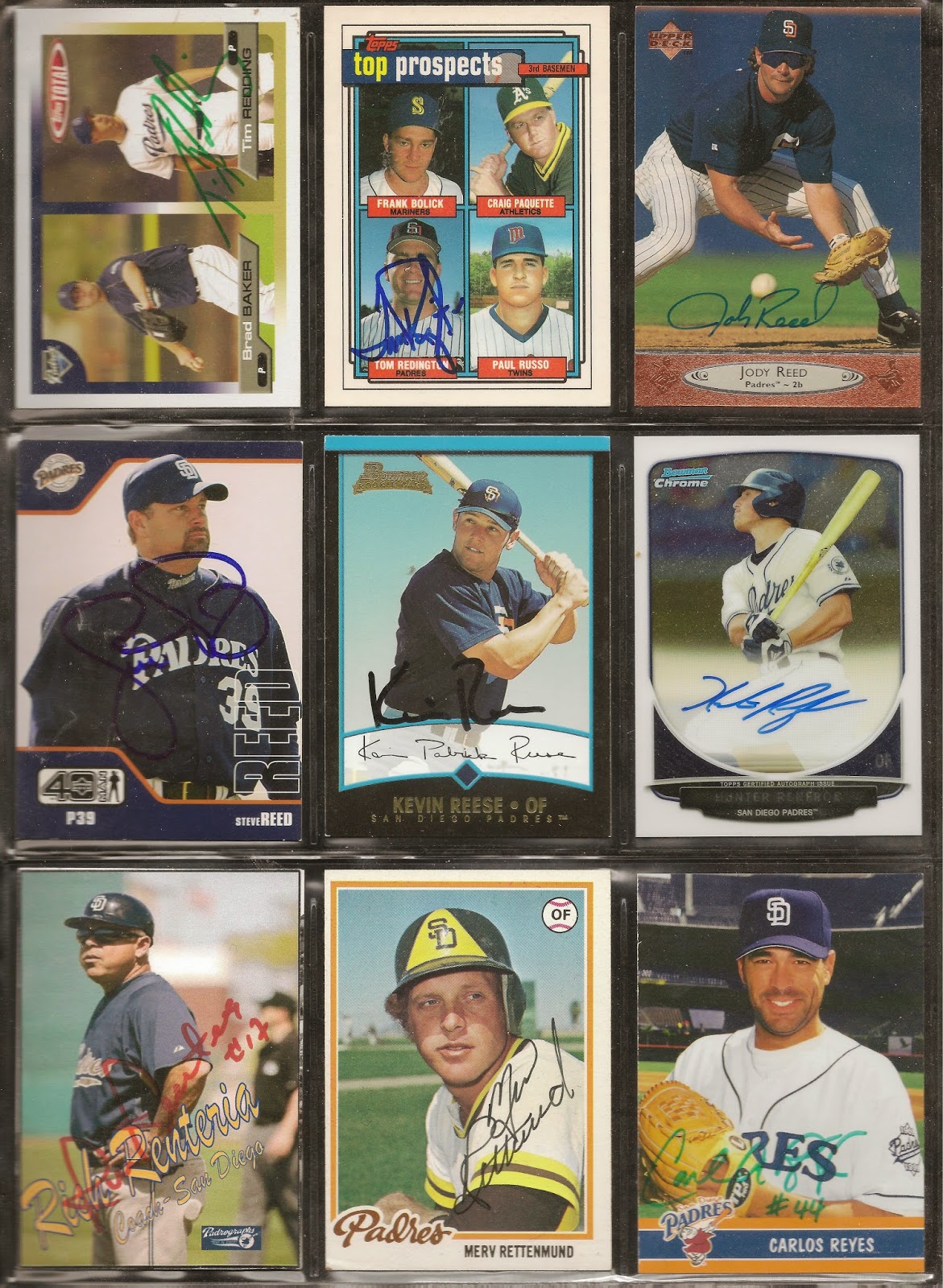 Letters left-9
Posted by Rod (Padrographs) at 11:03 AM No comments: