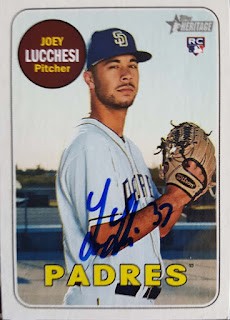 Joey Lucchesi, was the first pitcher from the 2016 major league draft to make his major league debut and just the second player from that draft to debut.  Joey was drafted by the Padres out of Southeast Missouri State.  He made his major league debut March 20, 2018 against the Brewers.  He started 26 games and pitched 130 innings going 8-9 with a 4.08 ERA.
I made a card and sent it to him, but I ended up picking this  up on eBay.  Joey is Padrograph #1110.
Posted by Rod (Padrographs) at 7:13 PM 1 comment: 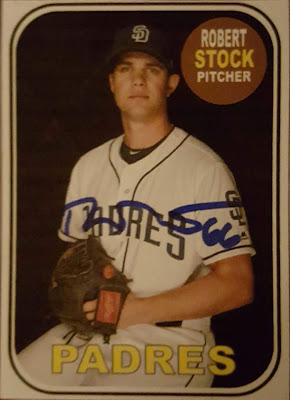 Robert Stock, #1109, is a intelligent pitcher.  He enrolled at the University of Southern California at age 16.  He was drafted by the St. Louis Cardinals in the second round of the 2009 draft as a catcher.  In 2011 he was transitioned to pitcher. He was signed as a free agent by both the Astros and Pirates in 2015. In 2016 he played in a independent league and in 2017 he played in the Cincinnati Reds organization.  The Padres signed him in November 2017 and he made his major league debut June 24, 2018 against the San Francisco Giants.  This is a custom that I made and sent to him, it took ninety nine days to come back.
Posted by Rod (Padrographs) at 7:13 PM 2 comments:

Larry Colton,#1106  played for the 1967 and 1968 Padres when they were a AAA affiliate of the Phillies.  He pitched 2 innings for the Phillies in 1968 and then got injured.  He pitched for the Portland Mavericks (The Battered Bastards of Baseball) in 1975.  He taught English in High School and has written several books on a variety of subjects.  According to Keith Olbermann he is the only major leaguer to  be nominated for a Pulitzer Prize.  He founded a book festival in Portland called Wordstock which ran for about 10 years.  Over the years we have become friends.  I made this custom from a 1968 team photo and had him sign it for me.