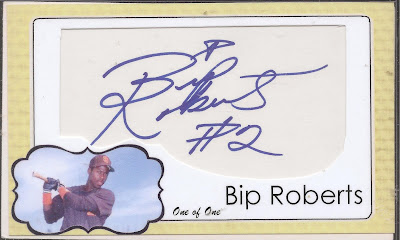 Recently Fuji scored three Bip Roberts signed index cards and asked Gavin over at BaseballcardBreakdown to make them into 1 of 1's.   This is the third of the trio.  Thanks Fuji and Gavin.  I really like this Bip card..
Posted by Rod (Padrographs) at 8:21 PM 3 comments:

Ralph Garcia is Padrograph #285 and previously was represented by a 1973 Topps multi player rookie card.  I found a photo of him online and made a 1974 style card and sent it to him.  I got it back in eight days.

Adam Cimber, Padrograph #1111.  This is not the first custom of Adam I made, back in 2013 I made a card of him with the Eugene Emeralds, the Padres Rookie League team at the time.  I sent this to him in April during Spring Training and got it back after 210 days from his home in Seattle.  He pitched in 42 games for the Padres before he and Brad Hand got traded to Cleveland.  He pitched in 28 games for the Indians.