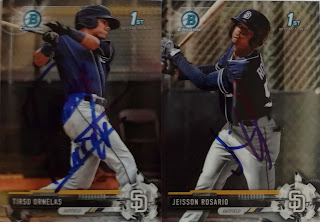 Posted by Rod (Padrographs) at 7:09 PM No comments:

Joys of a completed vintage set 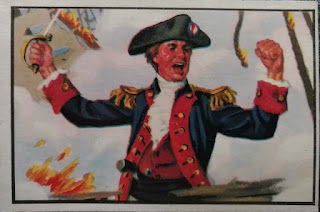 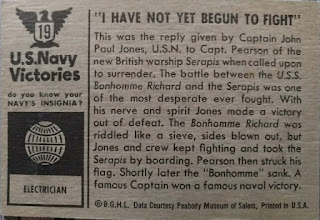 In January of this year I decided that I was going to complete a vintage set this year.  I decided that since I was raised in a Navy family and am a Navy veteran I decided on the 1954 Bowman U.S. Navy Victories set.  It is a 48 card set that goes back to the earliest days of the Navy up to the Korean Conflict.  I would buy a couple of cards each payday (of course now I have duplicates of three cards) to complete.  The fronts have painted scenes of Naval History on them and the back have a description of the scene.  The back also has a picture of a Naval Insignia and the question of what the insignia represents.  Between January and now I have been able to complete the set. This John Paul Jones card is the final card in the set.

Now I am deciding what 1950's non-sport set to work on next.  I am choosing between the following sets: 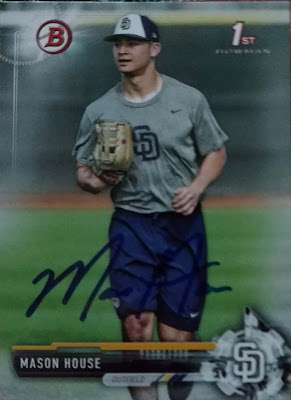 Padrograph #1087, Mason House was drafted in the third round of the 2017 Draft by the Padres.  He played for the Arizona League Padres in 2017.  I  can't find where he is assigned this year.  I am thinking that I might get to see him this year with the Tri City Dust Devils.
Posted by Rod (Padrographs) at 8:30 PM No comments: 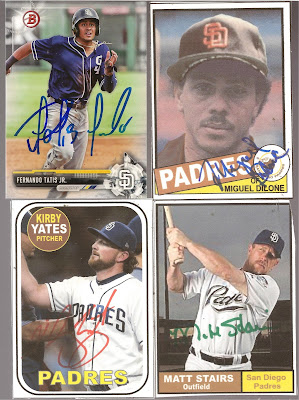 Fernando Tatis, Jr, Padrograph #1084; Fernando is just nineteen years old and has been in the Padres system for three years.  He is often referred to as the number one prospect in baseball.  I got this on ebay, it was $30, but I made an offer of $16 and it was accepted.
Miguel Dilone, Padrograph #1086; Miguel played from 1974-1985 in the Major Leagues, ending his major league career with the Padres in 1985.  The card is a custom that I made, with an assist from Gavin at Baseball Card Breakdown.  He changed Miguel from being in an Expos uniform to the Padres.
Kirby Yates, Padrograph #1085; Kirby came to the Padres as a free agent last season and has pitched in four games already this year.  This is a custom that I made and sent to Kirby at Spring Training.  It took 3 weeks to come back.
Matt Stairs, Padrograph #732; Matt is the new hitting coach for the Padres this year.  He also played for the Padres in 2010.  I had previously gotten his signature on a custom I made, but it was before I started making the customs look like actual cards.  I made this card and sent it to Matt at Spring Training, I don't know what happened to that upper right corner.
Posted by Rod (Padrographs) at 8:21 AM No comments: