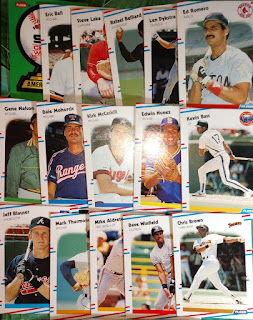 It is less eleven months until Christmas 2019 and I am not sure that I will finish documenting all the packs from Christmas 2018 by then.  The box still looks pretty full.  I may be able to see better when I get moved into my new room for my stuff.  So we have two upstairs room that I had one of and the other was a guest room, which didn't get used that often.  One son's family lives across the river in Vancouver, WA so they don't stay overnight and the others son's family lives in Vegas so they don't visit much.  So my wife and I  decided that she would move upstairs and use both rooms for all her sewing and fabric stuff.  I would move into the room that she had been using.  I got all my stuff moved out of the room and it is now stacked on the dining room table.  She has been making improvements to the rooms she is moving into so the room I am moving into is not yet available.  So some of my stuff is not accessible, my printer is hooked up and setting on an end table in the living room.
With all that said let's dive into a Padre heavy pack of 1988 Fleer.  This pack had nobody that I hadn't heard of.  It had four Padres, one of whom is a Hall of Famer and one who is deceased.  Mark Thurmond, played for the Padres for three years, including pitching in the World Series in 1984.  I remember talking with him in the stands at a Portland Beavers game, when he was with the Las Vegas Stars.  He told me that he had one leg that was shorter than the other due to a childhood bicycle accident.  Mike Aldrete, played with the  Padres in 1991 and is now the first base coach for the A's.  I will make a card for him and send it to him care of the A's this year.  Dave Winfield was the first player identified as Padre when he was inducted into the Hall Of Fame, he played for the Padres from 1973-1980 before joining the Yankees.  He now serves as Assistant to the Director for the Players Association.  Chris Brown played for the Padres in 1987 & 1988.  After baseball he drove tankers in Iraq for Haliburton and came under fire.  He passed away in 2006 due to burns he suffered at a vacant house he owned.  This is the card I have signed for my Padrograph collection.
Posted by Rod (Padrographs) at 11:18 AM

You're a patient man. I could never do one pack every few days.