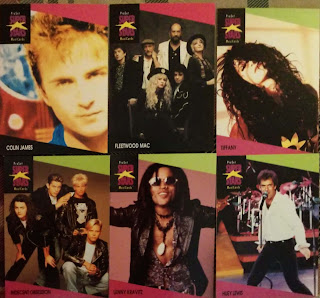 In our most recent pack of ProSet Musicards we have a couple of one hit wonders, two Hall of Fame band, two of my favorite artist, two posters and one band I have never heard of.  Colin James is still touring with his special brand of Blues.  Fleetwood Mac started as a blues band and has morphed into a Hall of Fame band that has had many hits across genres.  Tiffany has been seen by many people by in malls all across the country.  Indecent Obsession is a band I don't recognize even after reading their Wikipedia page.  Lenny Kravitz is one of my favorite guitar players, I really like Are You Gonna Go My Way.  Huey Lewis is one of my all time favorites, I got to see he, The News and The Tower of Powers horns in concert back in 1984.  M.C. Hammer is a former Oakland A's  batboy who got his Hammer name because owner Charlie Finley thought he looked like Hammerin' Hank Aaron.  The last time I saw him was on a ad for contact hangers. The Who is another band that started as a blues band and came to define Rock n' Roll and have been inducted into the Rock and Roll Hall of Fame.  The posters are pretty trippy.

I know Indecent Obsession because when their song "Tell Me Something" came out, the PD of the station I worked for at the time was convinced it was a huge hit and we played it like crazy. He was wrong about that one.

The Fleetwood Mac card shows the weird time when Lindsey Buckingham had been replaced by Billy Burnette and Rick Zito. No, you probably won't remember them even after reading their Wikipedia pages either.

I wish someone would produce a current product like this. There was so much variety. I love this set.

Who didn't like Tiffany back in the day? Fleetwood Mac is a true classic. Again I love this set and own it. Such great photos and cards.