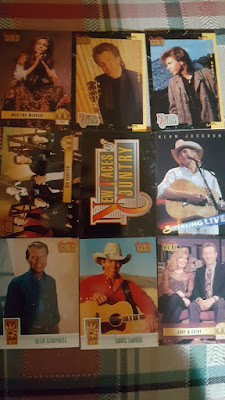 This is the second of Sterling Country Gold, Martina McBride was the first card of the pack and therefor the cover of the pack.  I have heard of 5 of the people featured on these cards and actually met one of them at K Mart.  Martina McBride has been a country music superstar, since about 1992 when these cards came out.  Rick Vincent recorded one album and now writes for others. James House has recorded several albums but doesn't seem to have achieved superstardom or even stardom.  Six Shooter is made up of Ronnie McDowells family members who were all between 14 and 18, they were supposed to be country's answer to the New Kids on the Block.  Alan Jackson is responsible for the anthem It's Five O'Clock Somewhere. Glen Campbell is known for more hits than I have space to list, he passed away in August of 2017 and had been a member of the Wrecking Crew and the Beach Boys before becoming a country music Superstar.  Chris Ledoux was an actual cowboy, who performed contry music.  He won titles in rodeo events and wrote music about his experiences on the rodeo circuit.  He passed away in 2005.  I met him at a KMart near us when he was signing autographs.  Cathy & Charlie were talk show host on CMT, I have heard of Charlie Chase, but not Cathy whose last name is never given.
Posted by Rod (Padrographs) at 8:10 PM

Pretty cool. Busting these types of packs are always fun. I'm a casual country fan at best but do know most of these. Fun stuff and to meet one of them in person, at a KMart no less, is a nice personal connection.

Wasn't big into country in the 90's... but I recognize McBride, Jackson, and Campbell. These days, I'll listen to some pop country in the morning every now and then to kick off my day.