There are a lot of years between the next two cards.  Elias Sosa at the end of his twelve year major league career pitched in forty-one games for the Padres in 1983.  Joe Ross was drafted by the Padres in 2011 and was part of a three team trade that brought Wil Myers to San Diego with Joe Ross and Trea Turner going to Washington. 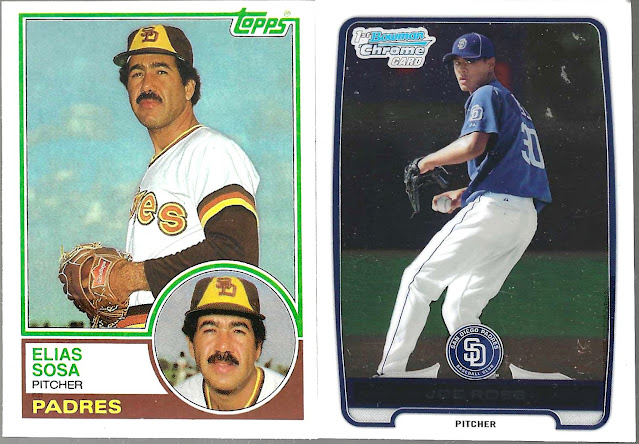 Voting for the Sosa 'stache!

It looks like another rout is on. I'm voting for Sosa, too.

Sosa for sure. Much better card.n

Always enjoyed the 1983 Topps design. Sosa for me.

Another vote for Sosa!

that bowman chrome card is only so-so, but the 1983 card is sosa! elias gets my vote.

Hard to vote against the 1983 Topps design. Sosa gets my vote.

From your title, I thought this was going to be about mid-1980s' catcher Steve Christmas.

Sosa gets my vote on this battle.

Piling on for Sosa and the mustache.

Normally I would go for Sosa with all the rest. It's the better card. But I am going to toss a throwaway vote on Ross!

'83 is one of my favorite designs. Definitely the Sosa.

I'm joining the masses and voting for the Sosa card. I admit my aversion to modern Bowman is part of that. But Sosa's card looks better and I love the early 80s uniforms.