Wil Myers Bowman card beat out the other Wil Myers card.  Good point by many of you that if it says Jackie Robinson Day on the card there ought to be some indication that it actually was from that day. With the voting completed for page three here is how the page looks. 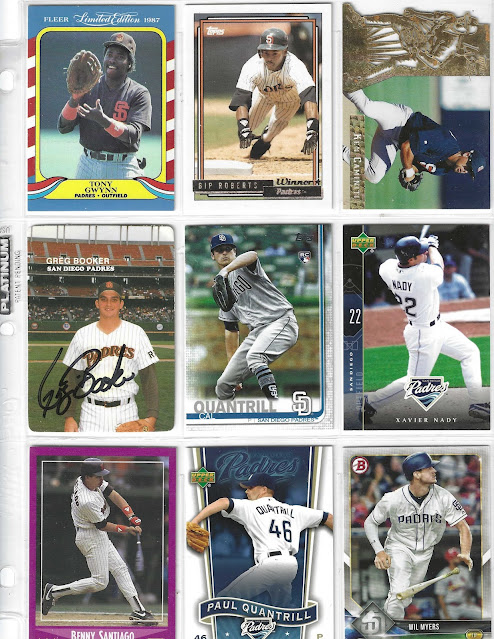 Sitting in the number nineteen hole as he should be is Tony Gwynn. He is followed by the King of Bipping, Bip Roberts.  Next up is the legendary Ken Caminiti.  Greg Booker was the son-in-law of Padres General Manager Jack McKeon who infamously trade him away.  One of two father-son combos who played for the Padres put in an appearance.  Xavier Nady VI, seems to be a hitting coach at this time.  Benito Santiago is who I think of when I think of Padres catchers.  Will Wil still be with the Padres next year?

Here is the first battle of page four.  I have a soft spot for Rafael Valdez as he was one of a group of Padres minor leaguers I gave a ride to once.  I think the Benito Santiago Rated Rookie is an iconic card.  Bruce Bochy may someday be inducted into the Hall Of Fame, unfortunately likely as a Giant.
Remember your vote today will enter you into a contest at the conclusion of the first ninety-nine cards.
Thank you for stopping by and thanks for your assistance.
Goodbye Professor Jones!
Posted by Rod (Padrographs) at 9:28 AM

Knowing that you gave him a ride, I'd go with the Valdez. I love Score oddball issues. Almost voted for Bochy. Read a post on 394 this morning about Gwynn striking out 3 times in a single game once during his career. I was curious to know if it was one pitcher who struck him out all three times. It was. Mr. Bob Welch. Anyways... Bochy hit a pinch hit walk off home run to beat the Dodgers that game.

I will vote for a Bentio RC over most other cards period, and definitely over these two!

All solid options, but I'd probably give the nod to Valdez due to the personal connection you've got with him (unless maybe he happens to pop up elsewhere in the frankenset).

Have always liked the Bochy card despite his affiliations.

i vote for benito, thanks to the dodger stadium setting for the photo used on the card.

I would normally vote for Benito but your personal connection to Valdez means he gets my vote here!

I have always liked Benito Santiago, so with that said, the rated rookie of his is my choice for this slot.

It's hard to pass up the Santiago, but I'd choose the got with a real personal connection.

Guess I'll go Valdéz too...I do like the colors on that card. Somehow I suppose major rookie cards aren't supposed to be in Frankensets! (Of course, there are so many different approaches to Frankensets that I'm sure I'd find one where I went the other way.)

I'll also go with Valdez. Like it when there is a variety of players and Benito has already an appearance in the early going.

Personal connections count a lot with me so I vote for the Valdez card. That Santiago card is great but I'm sure he'll have more cards in the binder than Valdez.

Gotta go with Benito. Not a huge '87 Donruss fan, but I love the Rated Rookie logo.

Also what is that Paul Quantrill card on the first page you posted? I had no idea he ever played for the Padres, much less had a card with them.

Like you said, Benito is an iconic card. He gets my vote.