Work has been insanely busy, then yesterday my wife and I sold apples at a farmers market. After that my son and I went and picked up 188 bricks and had to load and unload them. Then today I did laundry and cleaned out the fridge. My monthly game of Dead or Alive (mold or bad). Then I went to help my wife and son finish up the market they were working at. I ended up helping load and unload several pallets of produce. I can hear my pillow calling me now, I get to go to work tomorrow and relax.
Posted by Rod (Padrographs) at 9:06 PM 1 comment:

I haven't got much time on the computer at home lately, due to a series of remodeling projects and the arrival of our foreign exchange student and in the mess the bubbleopes from a couple of people have gotten lost so I don't know who I received stuff from. So if you sent me stuff and I owe you a particular team let me know. Thanks to those who sent stuff and a group hug to everyone for the friendships and the great blogs.
Posted by Rod (Padrographs) at 7:49 AM No comments:

Not hear on real blogs, that do this on a regular basis, not semi annually like I do. Go here and here and enter the contest. Some really cool stuff is up for grabs, plus these guys are pretty entertaining on their blogs. Maybe I will go through all my stuff and see what I can give away. But for now I am just going to try and win what these guys are giving away.
Posted by Rod (Padrographs) at 5:54 AM No comments:

4 before the namesake of my son

Glenelg Edward Dishman was signed by the Padres as an undrafted free agent in 1993. He worked his way up through the Padres system, even pitching a no hitter in the minors. He made his major league debut in 1995, pitching parts of 1995 and 1996 for the Padres. He pitched for Phillies in '96 and for Detroit in '97. He is currently the pitching coach for the Chattanooga Lookouts. I got the card off of Ebay a few years ago.

Patrick Edward Dobson, Jr. was one of four pitchers to win 20 games for the Orioles in 1971, the season after he played for the Padres and won 14 games. He played for the Tigers, Orioles, Yankees and Indians. He died of Leukemia in 2006. I got this card off of Ebay.

Todd William Donovan has never played in the major leagues, he was drafted by the Padres in 1999 and this year is playing in the Blue Jays organization. I got this signed through the mail.

Anyone want to guess who my son is named for?
Posted by Rod (Padrographs) at 6:49 PM 1 comment:

Yesterday I got a package in the mail that I was really looking forward to. It took almost two months to come back, I mailed it out on July 5 and I got it back yesterday. In it was an autographed 2009 Upper Deck card and a readerman.net card that I had included. Davids' favorite book is evidently 1984.
Posted by Rod (Padrographs) at 4:52 PM 1 comment:

This is just a little bit of the coolness available 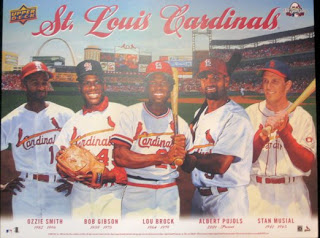 There is a contest for some really cool stuff over at Voice of the Collector. It's a bunch of stuff he got at the National Sports Collectors Convention. This is the only thing with any kind of Padre connection, and my son would like it being a Cards fan. click on over there and maybe there is something that would hit your collecting spot, plus it's an awesome blog.
Posted by Rod (Padrographs) at 6:16 AM No comments:

Panama to Puerto Rico via Arizona, Mississippi and Iowa

Roger I. (Villareal) Deago played professional baseball from 2003 to 2008, although his entire major league career consisted of 2 games during the 2003 season. He was signed as an amateur free agent in 2002. He played from 2003-2007 season in the Padres system and played in the Tampa Bay Rays system for the 2008 season. I got this signed through the mail.

Jaff Kyle Decker was drafted by the Padres in 2008 as a compensation pick for the loss of free agent Doug Brocail. Last year he played in Eugene and this year he is playing for the Fort Wayne Tincaps. Chad of Baseball in Fort Wayne got this signed for me at a game earlier this year.

Tommy Douglas Dean was signed by the Dodgers as an amateur free agent in 1964, he played one season for the Dodgers and was traded with Leon Everitt to the Padres for Al McBean. He played in 203 games for the Padres between 1969 and 1971, mostly at shortstop, but occasionally at 2B. I got this card signed through the mail, I can tell because I know that is the color pen I sent him.

Kory DeHaan was drafted by the Pirates in the 1997 draft and then the Padres selected him in the Rule 5 draft in 1999. He played in the majors in 2000 and 2002, he was the hitting coach for the Golden Baseball Leagues' Chico Outlaws until July 24, 2009 when he was appointed interim manager when Greg Cadaret was fired. I remember getting this signed through the mail.

Luis Antonio (Trioche) Deleon was signed by the Cardinals as an amateur free agent in 1977. He pitched 10 games for the Cards in 1981 before being traded to the Padres in 1982 as part of the Ozzie Smith-Garry Templeton trade. He played 4 seasons in San Diego ('82-'85), before signing as a free agent with the Orioles where he pitched for a year, he also signed with the Astros, but never pitched in the majors for them. He played in 207 games over his career, all but one of them in relief. That start came in his last year in the majors in 1989 in his one major league appearance for the Mariners.
Posted by Rod (Padrographs) at 11:33 AM No comments: