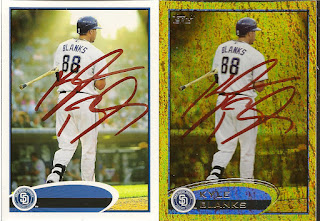 I sent these two to Kyle for my one per year collection.  Kyle will be the representative of the 2012 Padres.  I haven't been able to decide which one to use.  I got these back in just about a week from spring training. 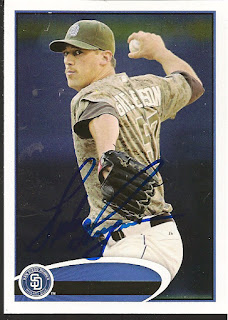 I already had a signed card of Luke Gregerson, but I wanted to get this card with no name on it signed.  It took about 8 days to go to Peoria and come back. 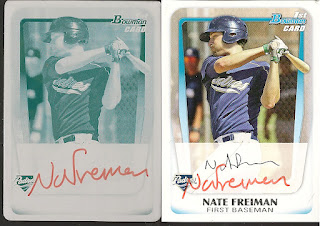 Nate Freiman is card number 798 in my signed Padres collection.  I sent him this printing plate and another card for him to sign.  I also sent him a bunch of cards to keep and a pen to use and keep. 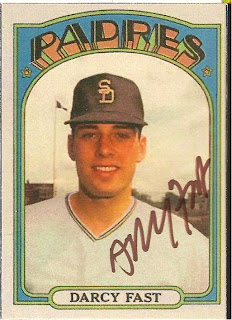 PunkRock Paint made this card for me so I could get it signed at a recent event that I attended.  Darcy never actually played for the Padres, but he had a 1972 Padres rookie card, with a couple of other people. 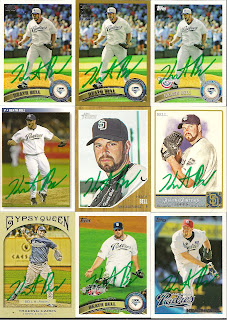 I sent Heath Bell two cards to sign, one was his SP from 2012 Topps and his sliding All Star Game card from the update set.  I also sent him an 8X10 and a bunch of cards for him to keep.  Well he signed the 8X10 and the sliding card, and kept the SP and signed everything else I sent him and included a few copies of his testimony card.  If you want an autographed Heath Bell card, let me know and we can make arrangements.  Specify which card you are interested in.  You can email me at padrographs at live dot com. 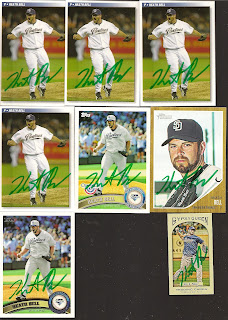 Someone sent me this, asking if I had seen if before or had one.  In doing some research I found out that someone is going to resurrect the fleer brand.  I just wish that they would match the uniform patch to the uniform pictured on the card.  I would like to see the back of the card to see what provence they give to the relic, for all we know it could be from Tim Flannery, the gift shop or from some fanatic.  I hope that this is real though cause some competition is needed for Topps before all their cards look like Panini designed them.
Posted by Rod (Padrographs) at 7:44 PM 1 comment: