one year through the mail 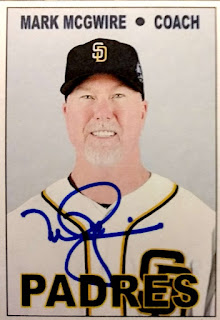 padrograph #1011, I sent this to Mr. McGwire last year at Spring Training.  I received it in the mail today.  I was really happy to see an envelope that I sent out come back and was really jacked to see that it was Mark McGwire.  I really didn't think that I was going to get this back.  That only leaves one coach that I sent to last year that I didn't  get back, Alan Zinter, the hitting coach.
Posted by Rod (Padrographs) at 8:19 PM 3 comments:

Dirk Hayhurst, this is an upgrade for a previous custom.  The previous one only had a front, so now I have a complete card.  Dirk pitched in 10 games during the 2008 season.

Luis Perdomo, this is the 2nd Luis Perdomo autograph that I have, but they are from two different players.  This Luis Perdomo pitched in 35 games for the Padres in 2016 and is at Spring Training with them this year.

Oswaldo Arcia, played in 16 games with the Padres last year and is at Spring Training with the Marlins.

Posted by Rod (Padrographs) at 5:28 PM No comments: