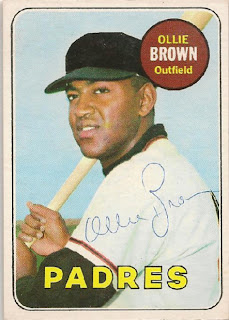 This is the first entry in the Padrograph blog. Padrograph is a word my son, David, came up with for us to refer to my Padres autographs. I use to collect every Padres card available, but eventually there were too many. Then I went to collecting every card of 5 Padres, but soon there were too many. Then I attempted to collect every Tony Gwynn card, but soon there were too many and they were too expensive. I decided that I would attempt to get signed cards of players pictured in Padres uniforms, some of them never played a game for the Padres, some went to the Hall of Fame from San Diego. As of today there are two main parts of my collection, 1 signed card representing each year that the Padres have been a major league team, from 1969-2008 and the other is cards of players pictured as Padres, there are also a few executives and owners represented. Some of the cards I have gotten in-person, many through the mail, and some from dealers on ebay and ABC Unlimited. I would like to share them with you. The first of each month I will show a card from the year by year collection and the rest of the month we will go alphabetically through the 700 different players. When I get a new one I will immediately post it. I hope you enjoy the posts. I have lots of extra signed cards and would be willing to trade for cards I need. I will develop a list of cards I need and extras that I have and post it eventually.

Ollie Brown was the first major league member of the San Diego Padres. The team had been the Padres as a minor league team from 1936-1968. Ollie was drafted from the San Francisco Giants on October 14, 1968 as the first pick in the expansion draft. In that draft the Expos, Pilots, Royals and Padres chose players from the teams in existence. Ollie played for the Padres for just over 3 years before being traded to the A's. He played in the majors from 65-77, playing for the Giants, Padres, A's, Brewers, Astros and Phillies. He is featured here on a 1969 Topps card with a lovely job of airbrushing of a Giants cap, the San Francisco colors are obvious on the sleeve of Ollies' jersey. I believe that I got this card in a group of cards I got from ABC Unlimited or in a lot on ebay.
Posted by Rod (Padrographs) at 10:55 PM 2 comments:

Padrographs-noun-a item signed by a member of the San Diego Padres baseball card, usually a trading card. I will be going live on October 1st to show case my collection of signed Padres cards. I have just over 700 signed cards from different players and personnel.
Posted by Rod (Padrographs) at 2:34 PM No comments: