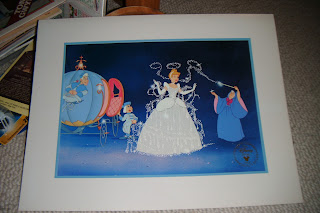 A commemorative lithograph from the DVD release of Cinderella, comes with the original envelope. Cinderella is a 1950 American animated film produced by Walt Disney and based on the fairy tale "Cendrillon" by Charles Perrault. Twelfth in the Walt Disney Animated Classics series, the film had a limited release on February 15, 1950 by RKO Radio Pictures. Directing credits go to Clyde Geronimi, Hamilton Luske and Wilfred Jackson. Songs were written by Mack David, Jerry Livingston, and Al Hoffman. Songs in the film include "A Dream Is a Wish Your Heart Makes", "Bibbidi-Bobbidi-Boo", "So This Is Love", "Sing Sweet Nightingale", "The Work Song", and "Cinderella".
RULES AND TERMS OF AGREEMENT
1.  The first person to respond that they want the item will be awarded possession of the item.
2. You agree that you will not return said item to Padrographs (or any of any his known or unknown aliases.) under any conditions.
3.  I do not need any thing in trade for you to take possession.  I am trying to move things that don't fit my collecting goals, or items that I have duplicates of.
4.  It may take me a few days to ship the item due to my and my wifes work schedules but I will get them out as soon as possible.
5.  After one week of being available said items will probably end up going to the Salvation Army.
6.  New items will be posted each evening at 6 PM, Pacific Standard Time
7.  email me your address at Padrographs at live dot com
Posted by Rod (Padrographs) at 6:00 PM

My wife would love it!

Dang it, wished I had seen this earlier. My daughter would have loved it!