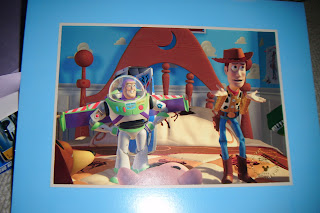 The last of the commemorative lithographs, this one is from Toy Story.  Toy Story is a 1995 American computer-animated film released by Walt Disney Pictures. It is Pixar's first feature film as well as the first ever feature film to be made entirely with CGI. The film was directed by John Lasseter and featuring the voices of Tom Hanks and Tim Allen. It was written by John Lasseter, Andrew Stanton, Joel Cohen and Alec Sokolow, and featured music by Randy Newman. Its executive producer was Steve Jobs. Toy Story follows a group of toys who pretend to be lifeless whenever humans are present, and focuses on Woody, a pullstring Cowboy doll (Hanks), and Buzz Lightyear, an astronaut action figure (Allen).

RULES AND TERMS OF AGREEMENT
1.  The first person to respond that they want the item will be awarded possession of the item.
2. You agree that you will not return said item to Padrographs (or any of any his known or unknown aliases.) under any conditions.
3.  I do not need any thing in trade for you to take possession.  I am trying to move things that don't fit my collecting goals, or items that I have duplicates of.
4.  It may take me a few days to ship the item due to my and my wifes work schedules but I will get them out as soon as possible.
5.  After one week of being available said items will probably end up going to the Salvation Army.
6.  New items will be posted each evening at 6 PM, Pacific Standard Time
7.  email me your address at Padrographs at live dot com
Posted by Rod (Padrographs) at 6:00 PM

MY wife would love it!