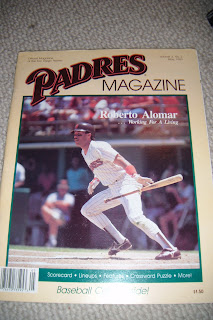 May 1989 Padres magazine featuring Roberto "Robbie" Alomar Velázquez (Spanish pronunciation: [aloˈmar], English: /ˈæləmɑr/; born February 5, 1968)[1] is a former Major League Baseball player (1988–2004), regarded by many as one of the best second basemen in MLB history.[2][3] During his career he won more Gold Gloves (10) than any other second baseman in history, and also won the second-most Silver Slugger Awards (4) for a second baseman.[4] On January 5, 2011, Alomar was elected to the Baseball Hall of Fame, in his second year of eligibility.[5 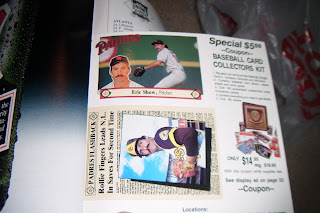 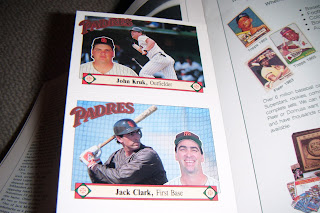 It contains cards of Roland Glen Fingers (born August 25, 1946) is a former Major League Baseball relief pitcher. During his 18-year baseball career, he pitched for the Oakland Athletics (1968–76), San Diego Padres (1977–80) and Milwaukee Brewers (1981–85). He became only the second reliever to be elected to the National Baseball Hall of Fame in 1992. Fingers is also one of only a few MLB players to have his number retired by more than one club (Oakland Athletics and Milwaukee Brewers).  and  Eric Vaughn Show (

/ˈʃaʊ/; May 19, 1956 – March 16, 1994) was a Major League Baseball player who played for most of his career with the San Diego Padres. On September 11, 1985, Show gave up Pete Rose's record-breaking 4,192nd career hit. Show played on the 1984 Padres team that won the National League pennant, and is the winningest pitcher in San Diego Padres history, also John Martin Kruk (born February 9, 1961 in Charleston, West Virginia) is a former Major League Baseball player and current baseball analyst for ESPN. and the only former Padre player whose cards I have been known to shred.

RULES AND TERMS OF AGREEMENT
1.  The first person to respond that they want the item will be awarded possession of the item.
2. You agree that you will not return said item to Padrographs (or any of any his known or unknown aliases.) under any conditions.
3.  I do not need any thing in trade for you to take possession.  I am trying to move things that don't fit my collecting goals, or items that I have duplicates of.
4.  It may take me a few days to ship the item due to my and my wifes work schedules but I will get them out as soon as possible.
5.  After one week of being available said items will probably end up going to the Salvation Army.
6.  New items will be posted each evening at 6 PM, Pacific Standard Time
7.  email me your address at Padrographs at live dot com
Posted by Rod (Padrographs) at 6:00 PM