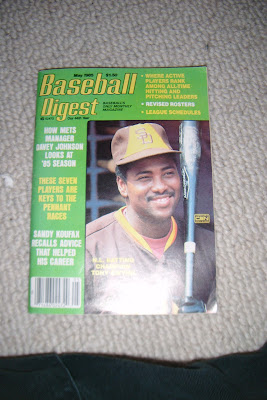 Anthony Keith "Tony" Gwynn, Sr. (born May 9, 1960), nicknamed Mr. Padre and Captain Video, is a former Major League Baseball right fielder. He is statistically one of the best and most consistent hitters in baseball history. He played his entire 20-year baseball career for the San Diego Padres (1982–2001). He was elected to the Baseball Hall of Fame on January 9, 2007 and was inducted on July 29. He is the first National League player born during the 1960s to earn the honor (Kirby Puckett was the first American Leaguer). He batted and threw left-handed.[1]

A group of Tony Gwynn items.  Baseball Digest from May 1985, Beckett Baseball Card Monthly, A Tribute to Tony; from his final season and a 1988 Topps pee chee folder.


RULES AND TERMS OF AGREEMENT
1.  The first person to respond that they want the item will be awarded possession of the item.
2. You agree that you will not return said item to Padrographs (or any of any his known or unknown aliases.) under any conditions.
3.  I do not need any thing in trade for you to take possession.  I am trying to move things that don't fit my collecting goals, or items that I have duplicates of.
4.  It may take me a few days to ship the item due to my and my wifes work schedules but I will get them out as soon as possible.
5.  After one week of being available said items will probably end up going to the Salvation Army.
6.  New items will be posted each evening at 6 PM, Pacific Standard Time
7.  email me your address at Padrographs at live dot com 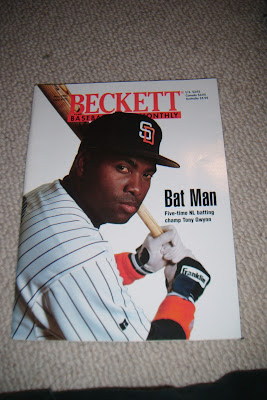 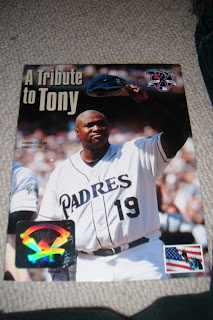 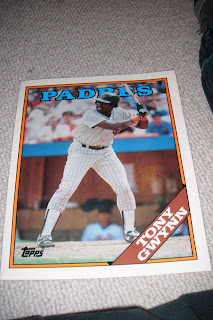 Count me in. #1 Gwynn fan reporting in sir.