The Letter R, Sheet 5 and Trevor Hoffman is in the Hall of Fame (the Padres HOF) 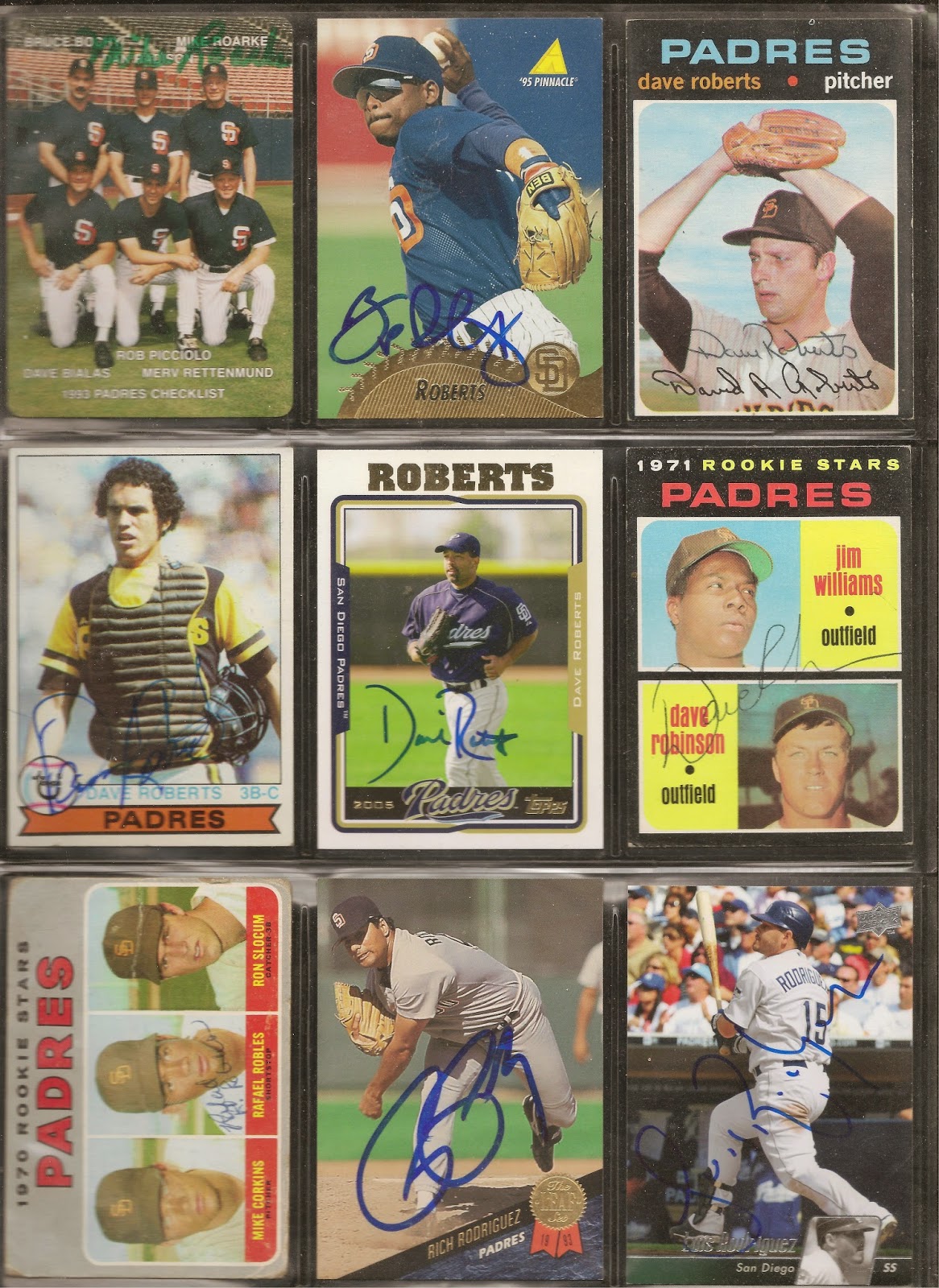 The Letter R, Sheet 4 and the Padres beat the Dodgers! Life is good (for today anyway) 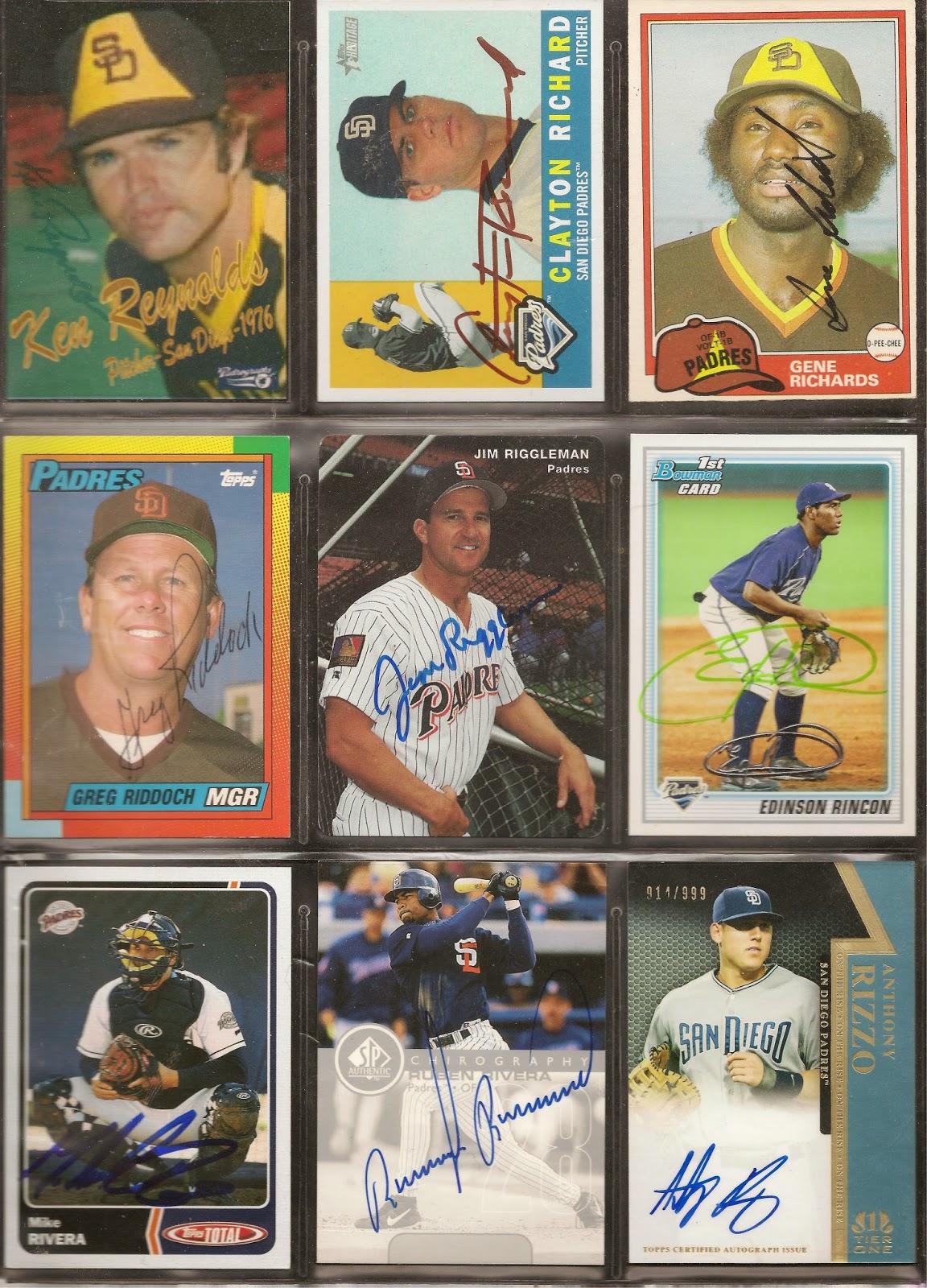 The Letter R, Sheet 3 and I am tired of Frozen and Toy Story 3

Our almost 3 year old granddaughter has been staying with us since last Saturday while her parents attend Burning Man in the Nevada desert.  We have watched Frozen, Toy Story 3 and Cloudy with a Chance of Meatballs 2 at least 5 times each since then.  Our boys did this also when they were little.
Give me a few days before watching them again.
Posted by Rod (Padrographs) at 4:10 PM 1 comment:

This is the story of a lovely lady, a trainer and an awesome team! 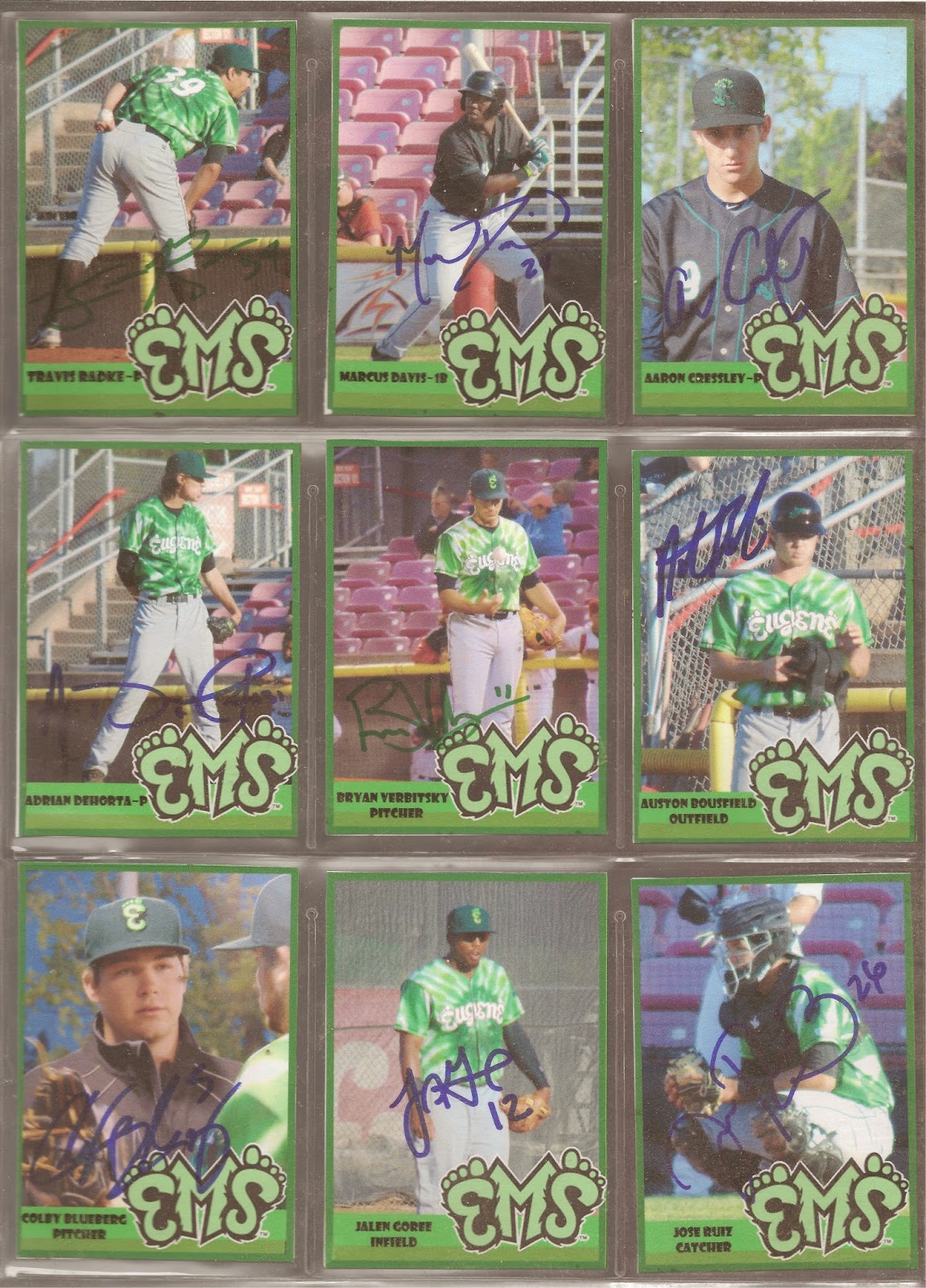 Last night my brother in law, Chuck Berry (yes, really), his son in law Ryan Scholl and I went out to Hillsboro to see the Hops (short season A, Diamondbacks) play the Eugene Emeralds (short season A, Padres).
Previously this season I had gone down to Salem-Keizer to see the Ems play the Volcanoes (Giants) and had taken a bunch of pictures in the ensuing two weeks I had finished making the set of cards you see at left, they all have backs, but I wasn't too impressed with them, so I didn't scan any of them. So all the photos up to and including Franchy Cordero on the 4th sheet are photos that I took at the games in Salem. 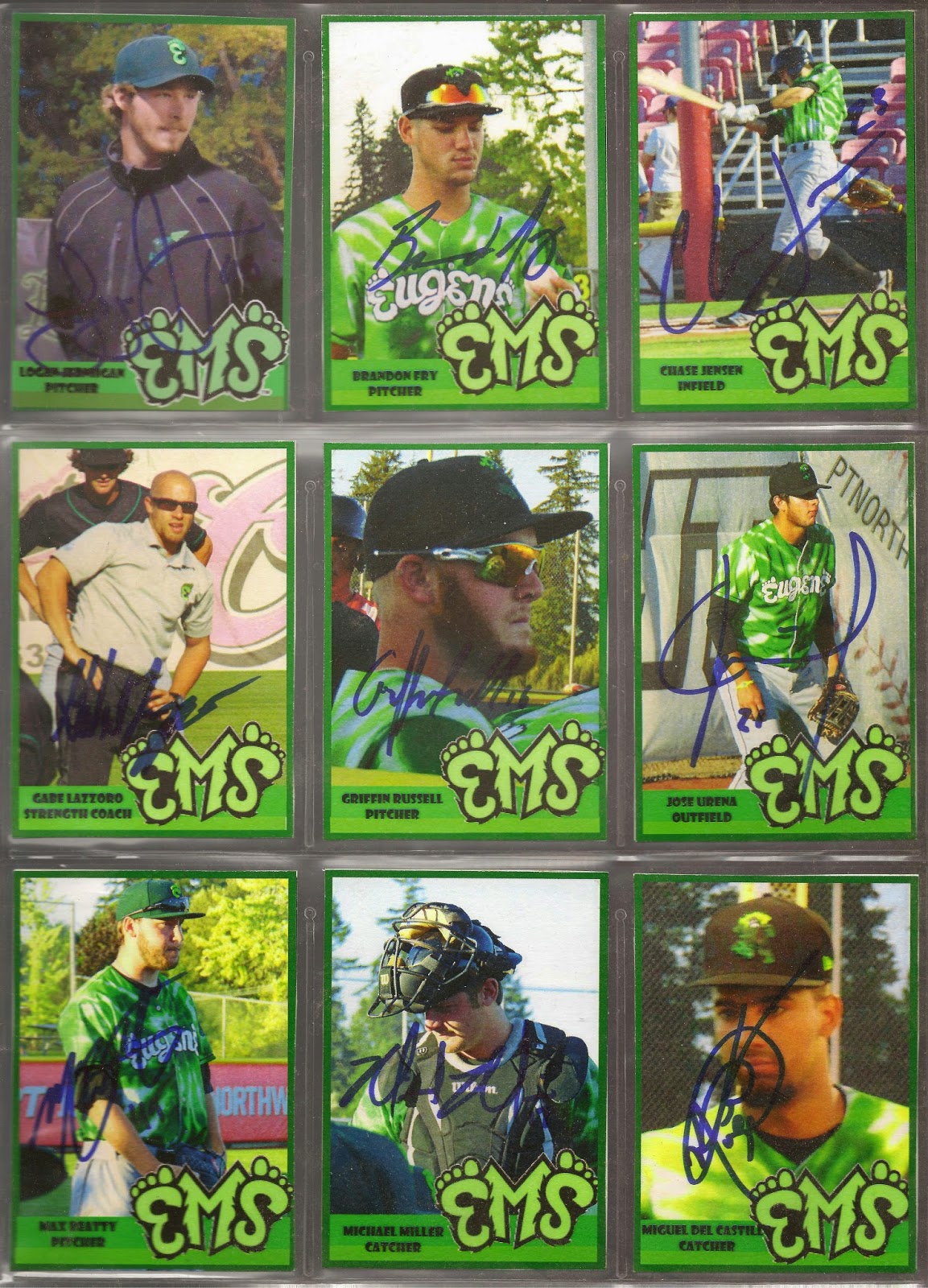 Last night I got to the game as the gates opened and got several signatures.  A couple of the players were amazed that I wanted their signatures.  I had made two of each card, one to get signed and one to give the player.  Before the game, Zech Lemond, the starting pitcher signed for me and asked me to hang on to his card til after the game.  He came over and got it and I got some other signatures including Mitch Mattoon the trainer. 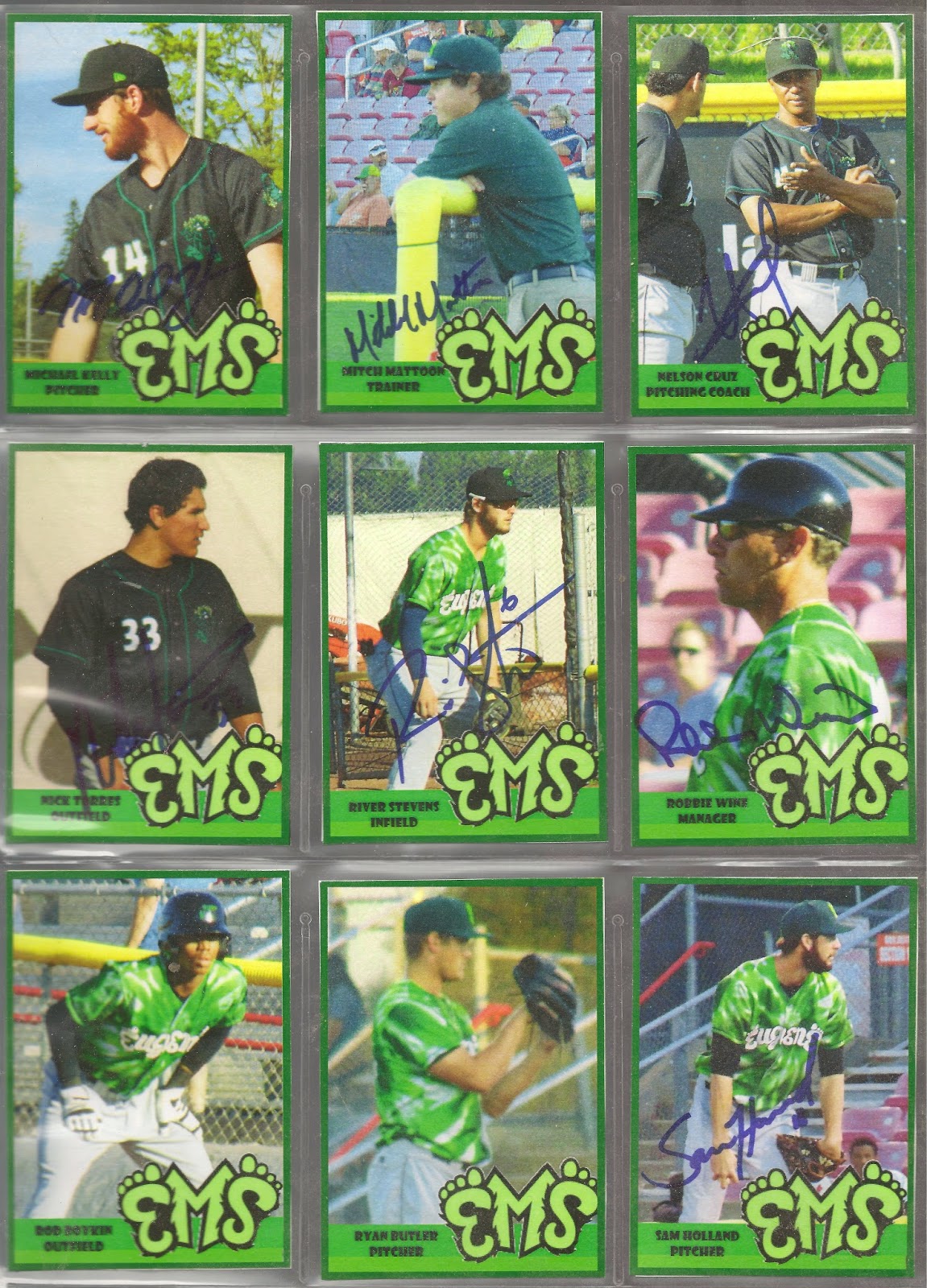 After I got as many signatures as I could and every one had left the dugout I left the stadium and noticed the Ems bus sitting there so I waited a few minutes and a lovely lady asked me who I was looking for.  I told her and we talked and she was Nick Torres wife and she wanted to see his card, (third sheet, second row, left).  We talked and she was from a town where many of my relatives lived and had gone to Oregon State.  She then helped me id many of the players as they came out, since they look different without their hats and unis on.  Karin made Nick go back and get his card so she could have it. The players, coaches, trainer and manager all helped load the bus.  Several of the players came and talked with me about the cards. Walker Weickel (fourth sheet, center) wanted to know what game I had taken the picture of him at. So we talked for a couple of minutes.  Travis Radke, (first card) had gone through the cards with me and told me who wasn't with the team any more.  So the only cards that aren't signed are guys that weren't with the team anymore.  I had 5 cards signed before I got to the game last night, ended up with a total of 39 signed out of 43, which means that I got 34 cards signed last night.  Max Beatty (second sheet, bottom left) took the cards I had for guys on the bus and handed them out.  As the bus got fuller I was down to two guys I still needed.  Mitch, the trainer was the last guy out of the stadium and asked me if I still needed any one. I told him Marcus Davis and Tom Dorminy and he had one of the other guys ask them to come off the bus and sign the cards for me. I wanted to thank all the guys on the team for their cooperation and thank Karin for her help in identifying players and Mitch for helping me to finish with the signatures.  It was a blast taking the pictures and then composing the cards and writing up the backs and doing all the work. 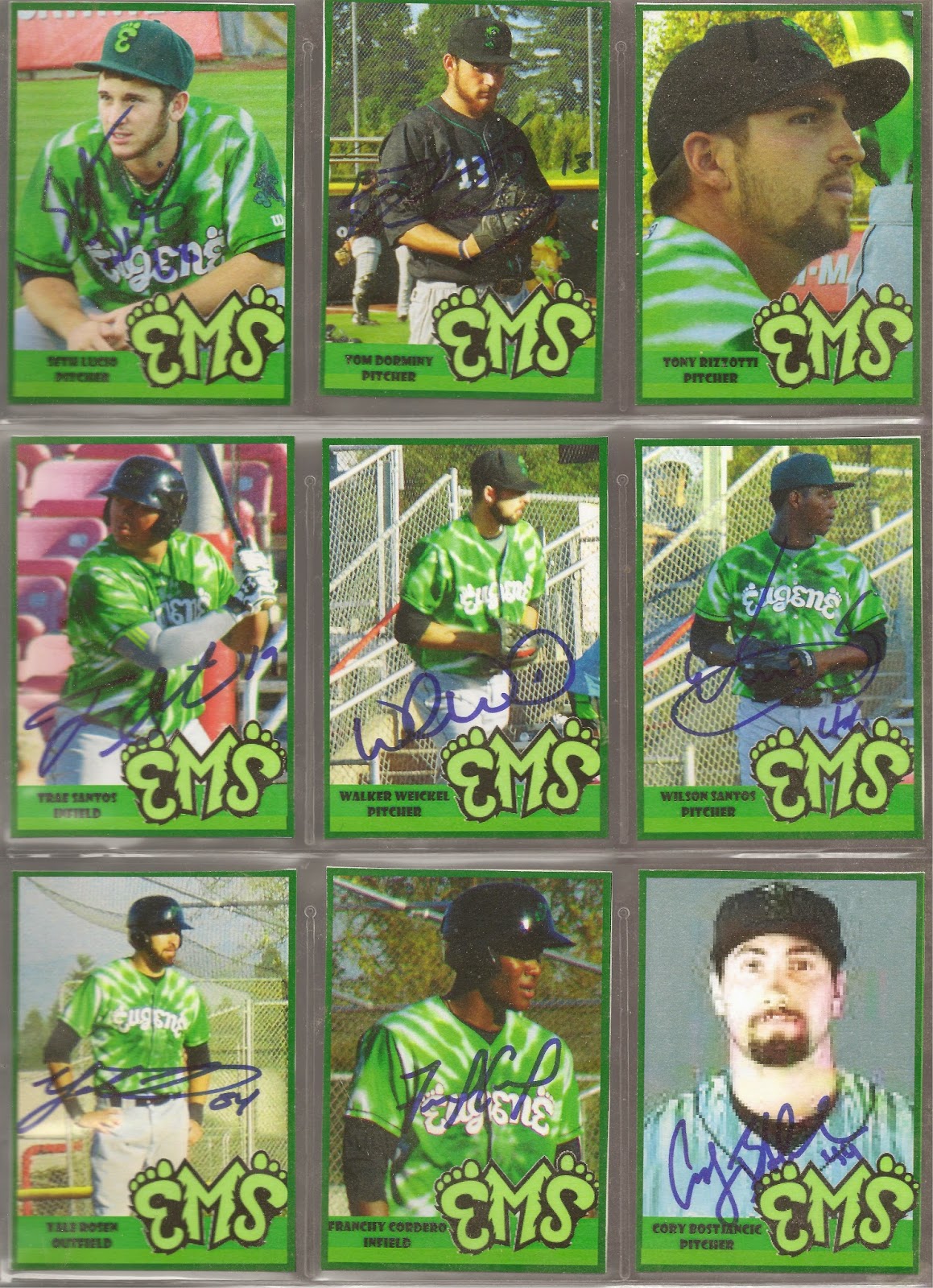 I have already started work on the design for next year.  I will be going to Salem again next year because it is one of the best places to take pictures and it has good access to the players.

On a personal note, my youngest son is getting married this weekend so we will be busy this week so I don't think I will post much this week.  And then the last week of the month we will baby sitting our 2 year old granddaughter so I don't see myself posting regularly until early next month. 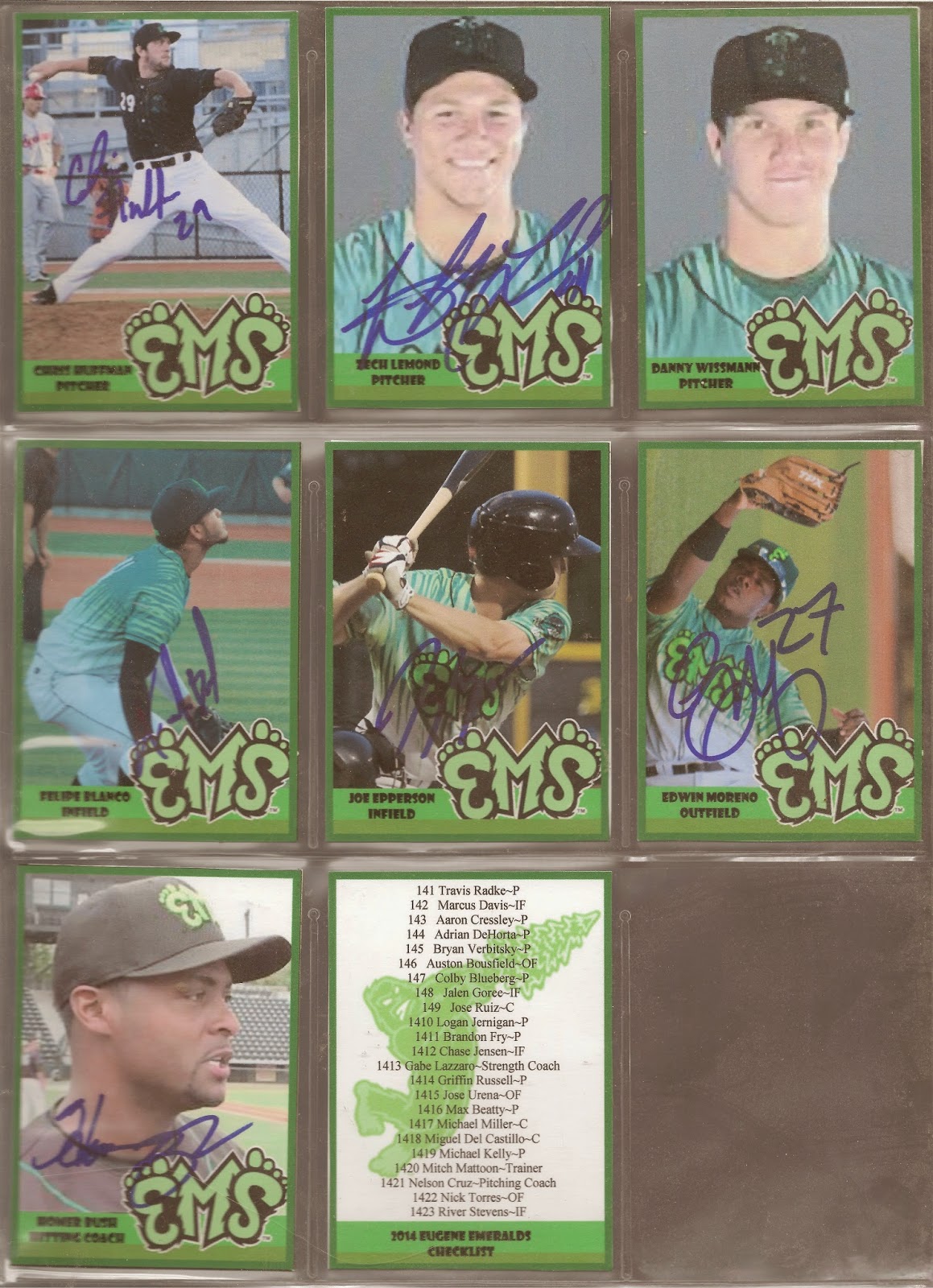