Barry Evans won that spot with nine votes, while Khalil Greene had five votes and Keith Moreland only got three votes. 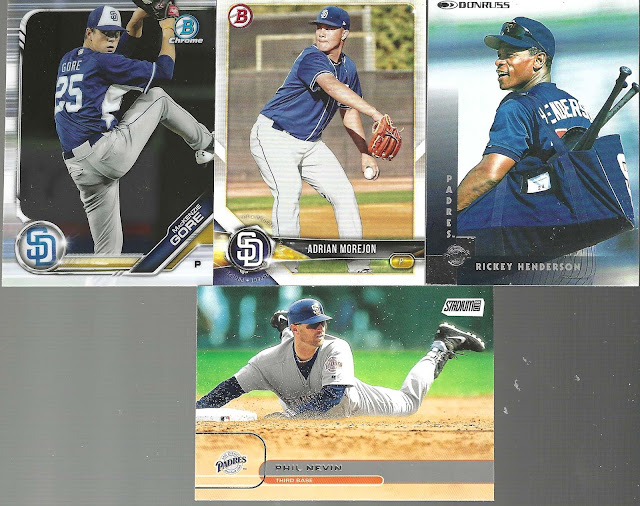 Today's battle between the Padres future and its past.  McKenzie Gore who still hasn't made his major league debut, Adrian Morejon who made his debut in 2020 vs Rickey Henderson, vagabond and Phil Nevin sliding into second or third.

Thank you for stopping by and thank you for your assistance.  By now you should know what to do.

Rickey and the bat bag is great, but I vote for Nevin.

The Rickey card has all the swagger.

Tough choice between Nevin and Rickey, but I'm going with the Nevin.

Voting for Nevin, showing Ricky how it's done!

My vote goes with the Man of Steal on this spot. The card looks as if he is getting around to go practice his trade.

Voting for Gore. I think he’s going to be a stud, and the Padres should’ve called him up in 2020.

rickey gets my vote.

I vote for Nevin. Great shot!

The image of Rickey is very unique and pleasing to the eye. So my vote goes to Rickey.

Unique photo of a HOF-er. That's tough to beat. Rickey!

Rickey AND a bat bag?