General and His Troops 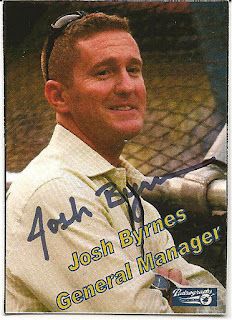 General Manager Josh Byrnes returned this 2011 Padrographs card in just about a week and a half.  Josh is the ninth General Manager the Padres have had since 1969 and I realized that I have signed cards of three of them, Buzzie Bavasi, Jed Hoyer and Josh Byrnes.  I went to wikipedia and I actually have signatures on cards of five of the GM's, cause I also have Jack McKeon and Keving Towers.  I am going to see if I can get signatures of the other four, Peter Bavasi, Bob Fontaine, Joe McIlvaine and Randy Smith. 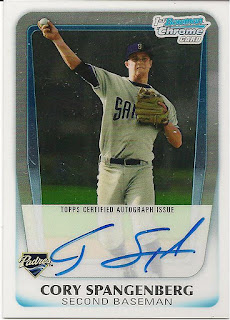 I bought this Cory Spangenberg card from this years Bowman Draft Picks and Prospects off of eBay.  He was the first round draft pick of the Padres, 10th overall, of the Padres this in 2011.  He was playing at a college where they used wooden bats, so he has that year of experience.  I wouldn't be surprised to see him in Petco Park this year, as bad as I think the Padres will be. 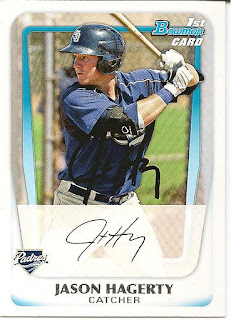 I bought this Jason Hagerty over at eBay.  Jason was picked in the fifth round of the 2009 draft.  He has worked up to AA San Antonio.
Posted by Rod (Padrographs) at 6:00 PM

What do you think about the Latos deal?

I had heard some about his attitude and that was why they were willing to deal him, same I hear with the O'dog. I have gotten to quoting Bill Murray in Meatballs,
IT JUST DOESN'T MATTER!