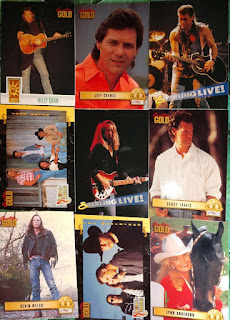 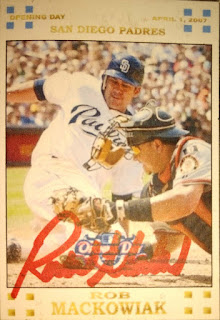 Rob Mackowiak, came and went in the US Mail in 15 days, to and from Wesley Chapel, Florida.  Rob played in 28 games for the Padres in 2007.  I made the card and sent it to him.
On to the Christmas pack, another pack of Country Gold.  Out of nine cards that were only three that I had never heard of .  Jeff Chance, made a couple of albums and sadly passed away in 2008.  Zaca Creek was a band of brothers, the four Foss brothers performed from 1989 to the band's breakup in 1994.  Kevin Welch, is a prolific writer and singer who has been performing since 1990.  Looks like another person to add to my Pandora, between the rockcards, musicards and country cards, I have added lots of variety to my listening.  All of the other acts showcased here are well known.

Mary Chapin Carpenter is a big favorite of mine. Mavericks are a fine country band as well.