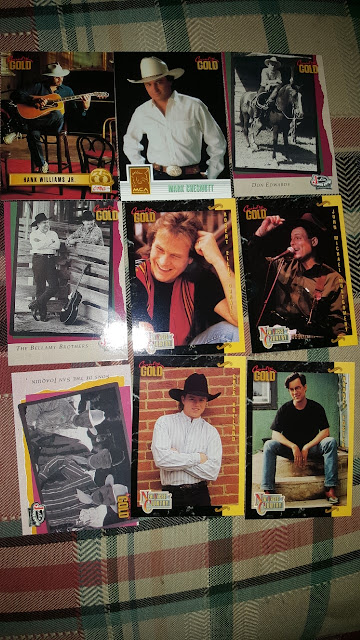 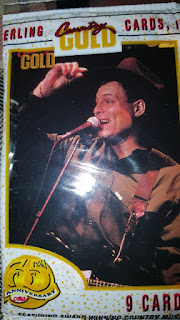 In 1993 Sterling Country Gold Cards issued a second series of cards.  Every pack of the cards will look different as the front of the pack is clear so you can see what the top card is.  In this pack it is one of the New Faces of Country, John Michael Montgomery, he had a big hit with the Grundy County Auction.  From upper right we start with Bocephaus, Hank Williams, Jr.  son of a country music legend and father of Hank Williams, III.  He had a big hit with All My Rowdy Friends are Coming Over Tonight and he had the theme song for Monday Night Football.  Mark Chesnutt had eight number one hits between 1990 and 2002. Don Edwards, is in the Western Music Hall of Fame.  The Bellamy Brothers are actual brothers who have had a number one hit with Let Your Love Flow in 1976.  Robert Ellis Orral is a  singer, writer and producer who is also indie rocker with the band, Monkey Bowl.  Sons of the San Joaquin are two brothers and a son.  Greg Holland and Radney Foster never became stars although they are still recording.
Posted by Rod (Padrographs) at 8:28 PM