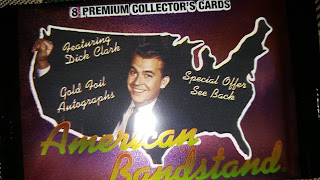 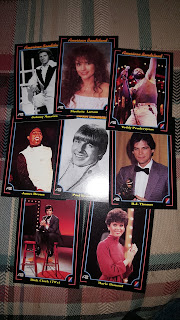 Another day, another Non Sports Pack.  This one is from 1993 and features acts that performed (or lip synced) on American Bandstand.  Hosted by the eternal teenager Dick Clark.  He passed away at the age of eighty three in 2012, but you can watch Dick Clark's Rockin New Years Eve tonight on your local ABC station.  The pack featured seven performers and a Dick Clark through the years card.  Of the seven performers I had heard of six of them and listened to music by them.  Johnny Maestro, was the lead singer for Johnny Maestro and the Brooklyn Bridge, best known for their performance of Jimmy Webb's The Worst that Could Happen.  Nicolette Larson is best known for her cover of Neil Young's Lotta Love.  She became a country star and had several hits in that genre.
Teddy Pendergrass, rose to fame as the lead singer of Harold Melvin & The Bluenotes before embarking on a solo career.  He was paralyzed in a near fatal car crash, but continued to record for several years. James Brown, The Hardest Working Man in Show Business and The Godfather of Soul had a storied career as a solo artist.  He recorded so many great songs, including I'm Black and I'm Proud.  Paul Revere, dropped his last name (Dick) when he became an entertainer.  He ran several restaurants in Idaho, when he went to pick up hamburger buns at the local bakery he met Mark Lindsay, who went on to become the lead singer of the Raiders.  B.J. Thomas, is probably best known for Raindrops Keep Fallin on My Head. from the Butch Cassidy and the Sundance Kid.  He had a long Contemporary Christian Music Career.  Marie Osmond, the only Osmond sister, half of Donny and Marie.  Now best known as a weight loss spokesperson.  I had a crush on her for many years, (I may still).  Out of all the performers in this pack only two are still alive.  The seventy six year old B.J. Thomas and the fifty nine year old Marie Osmond.

I opened up a box of this stuff a few years ago. Loved the variety of artists. Pretty sure I have duplicates sitting in a box somewhere. Let me know if you need any for your set.