I picked up some cheap boxes from the 1990's before Christmas to give  myself.  One of them was ROCKCARDS from 1992.  It seems to be mostly hair bands from that time, although in this pack I noticed one older rockstar.  It is a 288 card set, with a art card and a contest entry card in each pack.  No chance of winning anything since the contest got over in 1992.  Onto the cards 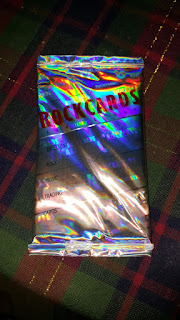 The wrappers are holographic foil, so right away you know these are ROCKCARDS. 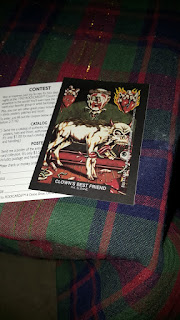 Each pack has a contest entry card, the card also includes an offer for a poster and something else, one is a dollar and the other is three fifty.  This art card looks like something that was album art for a band with some kind of devil angle in it. 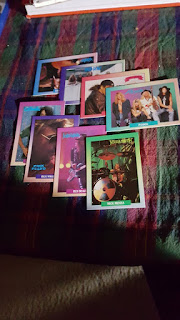 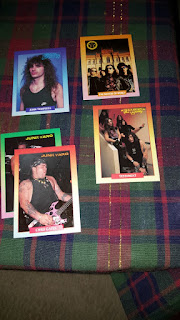 These were the bands I had heard of and a few that I listened to at the time (and one I still do).  Bon Jovi, Poison, Winger, Megadeth, Winger.  This pack also has an elder statesman of rock in it, it features Rick Wright of Pink Floyd fame.

These were the bands I had not heard of, but after reading on Wikipedia here is what I know. 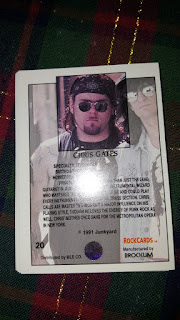 This is the back of one of the individual cards.  Chris Gates is one of the members of Junkyard.

One thing I like about this set is it is giving me the chance to expand my musical horizons.  I will be exploring some new music in the coming months.

No duplicates so far, hopefully I will be able to make a complete set.
Posted by Rod (Padrographs) at 10:21 AM

Looked up the checklist to see what bands were in this product. I wasn't really into bands like Winger and Poison, but there are a few other bands I listened to in the product.

If you're interested, here's the checklist I found online:

That is one weird checklist, not just the mix of bands, but the way some bands are scattered around the checklist, others come up all at once, and still others near each other but not consecutive.

Sisters of Mercy! Great card of a great band.

Love those cards. I have some commons from some time back. I'll definitely pick up the set at some time. Or who knows. Maybe I'll break a box or two. Fun stuff.