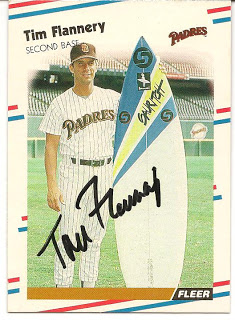 1.  My first goal was to get 99 unsigned copies of the 1988 Fleer Tim Flannery card.  Done.  I also wanted to get 11 signed copies, which I changed to nine. FAIL  I have six signed copies and have been in contact with Flan, he has agreed to sign three more for me.

2.  I wanted to collect a non sports set from the 1950's.  I chose the 1954 Bowman Naval Victories, since I and my father are Navy veterans.  Done.  I went beyond this goal and also finished the 1956 Topps Flags of the World set.  It was interesting to see what flags had changed since 1956 and there were a few countries that no longer exist.

1.  I would like to collect 99 copies of the Bip Roberts sombrero card from 1996 Score.  I would also like to get 9 different autographed cards of Bip with the Padres.

3.  I would like to get to 1,150 Padrographs.  I have been making customs for players who never had a Padres card and sending them out.  I have gotten a few back, hopefully I will get more back this season and all the guys from 2018 who didn't sign will sign something so I can include them.

5.  I would like to update the website so that I have all the cards I have signed on the website.  That may take longer than a year.

6.  I would like to make a set of the Tri City Dust Devils this year and get it signed by the majority of the players.

7.  I would to proofread every post before it goes up.  I have reread too many of my post that don't make sense because I have left out words.
Posted by Rod (Padrographs) at 8:20 PM

LOL at the last one.
Good luck with these all! I'll check to see if I've got any extra sombrero Bips.

Ugh. My least favorite thing about blogging is proofreading. I still do it. Yet I still come across mistakes almost every time I go back and reread one of my posts.

Best of luck on your 2019 goals! Are you to put up your 1952 Topps Presidents wantlist up? I might be able to help.