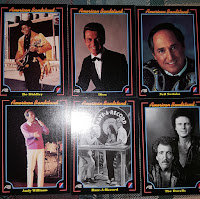 It's another pack of American Bandstand cards.  This first card is the dance floor which changed over the years.  Next up is Del Shannon, had a 1961 #1 hit with Runaway.  Bo Diddley was important in the transition from the blues to Rock and Roll, he was well known for his rectangular guitar and his hit Bo Diddley.  Dion had 39 Top 40 hits in the 50's and 60's, especially Runaround Sue.  Neil Sedaka was known mainly as a composer but had a hit with Walking in the Rain with The One I Love.  Andy Williams had his own television show, which introduced the Osmonds to the United States and had a big hit  with Moon River.  For many years Dick Clark would introduce a new song and then ask a couple from the audience to rate the song, which gave rise to the quote, "I'll give it a 98, it has a good beat and is easy to dance to". The Dovells have gone from a quartet to a duo and have even performed with President Bill Clinton.
Posted by Rod (Padrographs) at 6:32 PM

Opened up a box of this stuff as well. If you need any singles let me know.

The reference to "Walking In The Rain With The One I Love" confused me, as it's actually the title of a song by Love Unlimited. The song you're referring to is called "Laughter In The Rain". (Fun fact: when Billy Joel wrote "Movin' Out", he originally had it to the tune of "Laughter In The Rain", until the members of his band pointed it out!) Sedaka actually had a ton of hits--he was a big star in the pre-Beatles days with things like "Breaking Up Is Hard To Do", "Calendar Girl", and "Next Door To An Angel", and made a comeback in the mid-70s with the aforementioned "Laughter In The Rain", "Bad Blood", and a new, slower version of "Breaking Up Is Hard To Do".