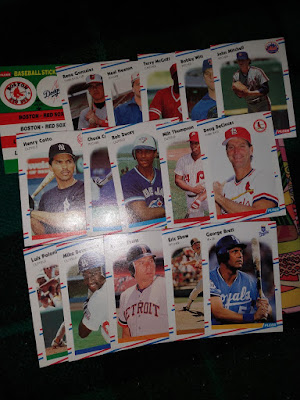 Another day another pack of 1988 Fleer with no surfboard.  A truly unremarkable pack with one Padres player and a Hall of Famer.  Eric Show was a pitcher who was a Padre from 1981 to 1990, who also pitched one year for the A's.  He unfortunately had a few demons, he died in 1994 at just 37 years old.  George Brett played for the Kansas City Royals from 1973-1993 and was inducted into the Hall of Fame in 1999. 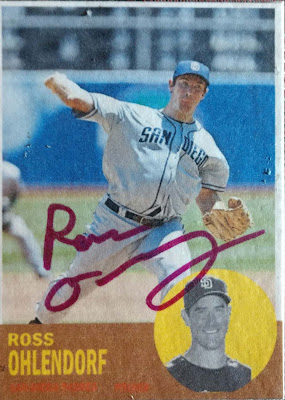 Ross Ohlendorf is Padrograph number 1118. I just got  this custom back in the mail today.  I sent it out on New Years Eve to Austin, Texas.  Ross pitched in the majors for 9 seasons and pitched in thirteen games for the Padres in 2012.

Ohlendorf has an interesting signature. I wonder what the loop at the very end (by his hat) represents.

Brett does not look happy with the ump. Good stuff.