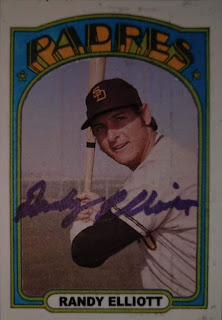 I opened my third pack of American Bandstand cards today and was disappointed by the collation.  Only three packs in and doubles.  Six of the eight cards in the pack were duplicates of cards from one of the other two packs.  Bobby Vee, was known for the song, Suzie Baby.  He got his start filling in for Buddy Holly, the night the music died.  When Holly, Ritchie Valens and the Big Bopper died in a plane, Bobby and his brothers filled in at the next concert.  He once shared a stage with Elston Gunn, AKA Bob Dylan, who paid tribute to him at a concert. He had six gold singles and one gold album.  American Bandstand paid tribute to The Beatles, I would guess multiple times. 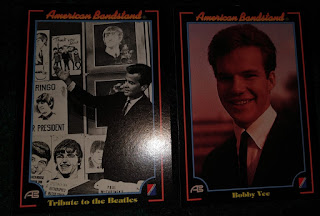 Oh man. That is bad collation. I busted a box of this a while back. If you don't have a complete set after you bust your box, let me know and I might be able to help you out.