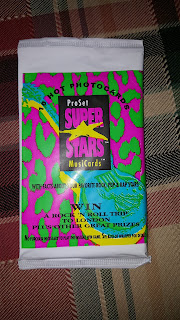 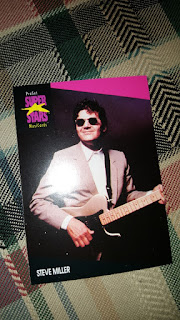 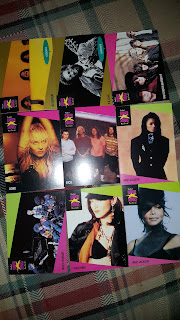 Included in the Christmas stuff was a pack of Night Owls favorite set, ProSet Music SuperStars.  I remember this set from when I worked at Baseball Cards and More from 1990-1995.  Opening the pack with 10 cards, mostly people I have heard of  but a couple I hadn't:


I have owned music by five of the acts in the pack and still listen to several of them.
Posted by Rod (Padrographs) at 4:00 PM

Nice pack. I love Bruce Hornsby and his piano playing.

Still looking for cards from this set, mostly from the harder to find high numbers.

I'm a big fan of Hornsby. Gonna have to see if he has music on Spotify.

Didn't know you had worked at BBC&M; one of the more memorable retail card stores I've ever seen. First time visit sometime in the mid-late 00's, owner showed me a 500 ct box containing nothing but B Bonds HR History cards...I stupidly asked him, "how much wax did you have to open to get all of those?"

I love these cards! I'm not sure I could stop myself from picking up a pack if I found them. Some pretty good stars as well. Fun!