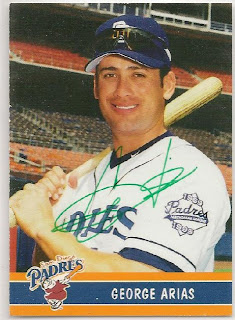 George played for three teams in two cities. That is a trick he was also drafted three times. He was a part of the Padres team that went to the World Series, however he only played in the Division Series and didn't play in the NL championship or the World Series. He played in 1996 and '97 for the California and Anaheim Angels, part way through the '97 season he was traded to the Padres as part of a trade involving Rickey Henderson. He was drafted by the Giants in the 21st round of the 1991 draft, by the Orioles in the 38th round of the '92 draft and finally signed after being drafted in the 7th round by the Angels in 1993. He must have had a great year at the University of Arizona to go from the 38th round to the 7th round. He played 3rd, 1st and DH during his career. I got this 1999 Keebler autographed through the mail.
Posted by Rod (Padrographs) at 5:08 PM