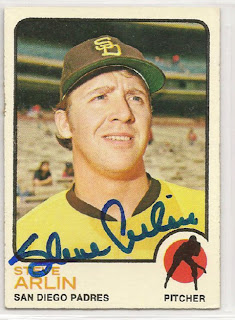 Steve Arlin was born just after the end of World War II, just more than a month after the bombs were dropped on Hiroshima and Nagasaki. He was drafted by the Tigers in 23rd round of the 1965 draft but did not sign with them. Then in 1966 he was drafted in the first round by the Phillies and signed with them. Then in 1968 he was drafted by the Padres as the 57th pick in the expansion draft. He then played 5 and 1/2 years for the Padres before being traded to the Cleveland Indians for Brent Strom and Terry Ley. Terry is from Portland and I have met some of his relatives in my 27 years here in Portland. He had a career record of 34-67 and a 4.33 ERA for his six year career. I remember getting this 1973 Topps card signed through the mail.
Posted by Rod (Padrographs) at 6:53 PM

Your blog has now been added to the Sports Card Blog Roll.