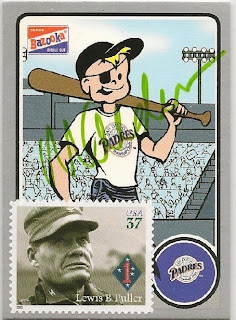 Sandy Alderson is the President of the San Diego Padres. I used a Bazooka Joe card, combined with a Chesty Puller stamp. Chesty Puller is a legend in the United States Marine Corp, Sandy Alderson served a hitch in the Corps, in Vietnam. He is a lawyer who graduated from Harvard Law School. He was working for a law firm in San Francisco when one of the partners left to become president of the A's when his father in law bought the team. In 1981 Alderson left the law firm to become the GM of the A's, he is viewed as the mentor of Billy Beane, the A's current GM. Between 1998 and 2005 he was Executive Vice President of Baseball Operations for Major League Baseball. I got this through the mail using one of the Sharpies' from the variety pack. It didn't take very long to be returned.
Posted by Rod (Padrographs) at 9:48 PM