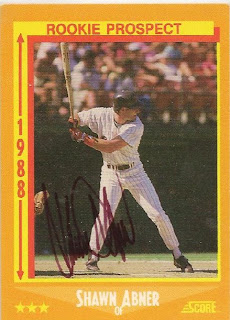 I have my Padrographs arranged in alphabetical so Shawn Abner leads off the collection of Padres. Abner was the first pick of the 1984 draft, drafted by the Mets. In 1986 he was traded to the Padres along with Stan Jefferson, Kevin Mitchell, Kevin Brown and Kevin Armstrong for Kevin McReynolds, Gene Walters and Adam Ging (who), in what has to the trade involving the most guys named Kevin. He played for the Padres until 1991 when he was traded to the Angels for Jack Howell. He played for the Angels until he was released in 1992. Wonder what he has been doing for the last 16 years. I know that I got this card through the mail, because of the color of the ink. I used to buy the multi-color packs of Sharpies and then send them to the players. I have used the Harvey Musselman and Jack Smalling list to get addresses. Shawn Abner is shown on a 1988 Score card.
Posted by Rod (Padrographs) at 6:20 PM