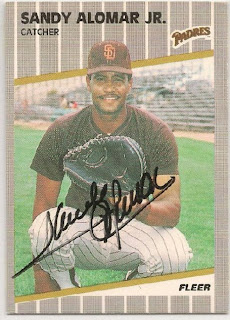 I used to have all the information on how I got each card on the computer but occasionally computers crash and you lose everything. My best recollection of getting this card signed is at a Portland Beavers game when Sandy was with the Las Vegas Stars. I remember some doofus trying to get something signed at the same time, and Sandy saying to him 'You are going to sell that" and the doof saying " I wouldn't sell anything of yours, unless I get a really good price." At that point Sandy just walked away.

Sandy played 20 season in the majors from 1988-2007 with the Padres, Indians, 3 different times with the White Sox, Rockies, Rangers, Dodgers and Mets. The majority of his career was spent in Cleveland, where he played for 11 years. He made appearances in two World Series with Cleveland, he was the American League Rookie of the Year in 1990, the 1997 All Star Game MVP, which was one of his 6 All Star appearances. He won one Gold Glove in his career. I remember him as very friendly when I used to go see the Stars play against the hometown Beavers.
Posted by Rod (Padrographs) at 7:29 PM

Wow, I just got this card tonight in one of those Hidden Treasure- "World's Greatest Card Chase" packs in a repack box from Wal-Mart. Mine obviuosly wasn't signed though.