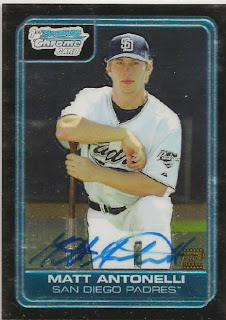 Here is a guy who only has 21 games of Major League experience. He was the 17th pick in the 2006 Major League Draft. He has played in every stop in the Padres minor league system, Eugene, Fort Wayne, Lake Elsinore, San Antonio and Portland. I got to see him play in Portland and know where he played in Eugene. The stadium in Eugene, Civic Stadium, was right across the street from my high school. The class of '75 had our graduation in the stadium, we sat in the box seats down the first line and went from home to first to get our diplomas.

Matt Antonelli made his major league debut on September 1, 2008 against the hated Doggers. He got his first major league hit off of future Hall of Famer Greg Maddux. He got 1 home run this year. He is supposed to be the Padres 2nd baseman of the future. I got this card certified autograph card from ebay.
Posted by Rod (Padrographs) at 8:14 PM