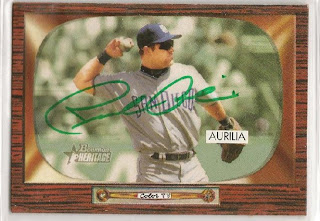 Rich Aurilia played 51 games for the Padres in 2003 as his career was winding down. He was drafted by the Rangers in 1992 and then traded to the Giants in 1994. He played 9 seasons for the Giants before being granted free agency and signing with the Mariners. He played 73 games with the Mariners before being part of a conditional trade with the Padres. After that he was a free several times playing two seasons with the Reds before playing two more seasons with the Giants and seemingly finished his career in 2006. He was an All Star in 2001 and played with the Giants in a World Series loss to the Angels. I got this Bowman Heritage card signed through the mail.
Posted by Rod (Padrographs) at 7:21 PM

aurilia is one of my favorite giants players. expect something in the mail - i just sent something today.s