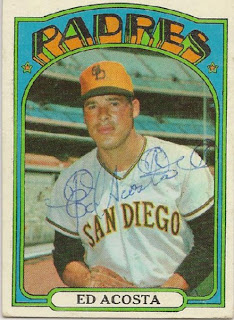 Ed Acosta seems to have had the proverbial cup of coffee in the major leagues. According to baseball-reference.com he pitched in 57 games over 3 years for the Pirates and Padres. He was originally signed as a amateur free agents by the Astros in 1967, then before the 1970 season he was sent to the Pirates in a unknown transaction. He pitched in three games that year, then on August 10, 1971 he was traded to the Padres along with Johnny Jeter for Bob Miller. He hadn't pitched in any games for the Pirates before he was traded and in the last month and a half of the season he pitched in 8 games for the Padres and then in 1972 it was his big season as he pitched in 46 games and finishing the season with a 4.45 ERA. He finished his major league career in October of 1972. I got this 1972 Topps card in a large lot I purchased on ebay.
Posted by Rod (Padrographs) at 8:13 AM