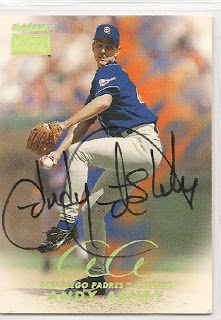 Andy Ashby was a member of the Padres three different times. He played in the 1996 NLDS when the Padres lost to the Cardinals, played in the 1998 run up to the sweep by the Hankies in the 1998 World Series. He was originally drafted by the Phillies in '86, then was drafted by the Rockies in the Expansion draft. In '93 he was traded from the Rockies to the Padres along with Brad Ausmus and Doug Bochtler for Bruce Hurst and one of the Padres two Greg Harris'. He was with the Padres until he was traded back to the Phillies in 1999 for Adam Eaton, Steve Montgomery, and Carlton Loewer (didn't he fall out of a tree and break his leg?). The next year he was traded to Atlanta for Bruce Chen and Jimmy Osting. In November he was granted free agency and signed with the Doggers, then in 2003 he was a free agent again and in 2004 and 2005 he signed as a free agent with the Padres. He didn't pitch at all in 2005 and was granted free agency after the season. He was an AllStar twice, finished with a 98-110 records and a 4.12 ERA. I believe that I got this card signed through the mail.
Posted by Rod (Padrographs) at 3:25 PM